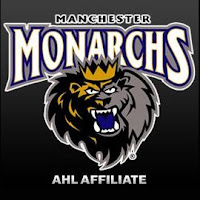 Jeff Zatkoff has reemerged as the top goalie in Manchester.

For those unfamiliar with the goaltending situation with the Kings top farm team, the Manchester Monarchs (AHL), here’s a quick, watered down version…

Jonathan Bernier was the starting goalie there two years ago. Zatkoff was his understudy and was expected to be the number one guy last season. Things started out that way.  Yet, soon thereafter, rookie Martin Jones stole the show and his spot – riding his early season success all the way to the AHL All-Star Game. Then, Stella got her groove back and Zatkoff was strong down the stretch and in the playoffs.

Even so, Kings coaches and management continued to heap lots of praise on Jones during last summer’s Development Camp and it looked like Jones would most likely get the bulk of starts in Manchester this season.

Zatkoff was selected to join the Kings as the ‘third goalie’ on their season opening trip to Europe. However, it was more for the experience than anything else.

Once he returned to the U.S., the Monarchs were off to a rough start and neither he nor Jones were looking too good in net, with highly inflated goals against numbers.

Well, all is forgiven and life has returned to normal.

In the month of December, he posted a 5-2-0 record with a 1.70 goals-against-average and a .946 save percentage. Then, earlier today, the AHL announced he has been voted as the Goaltender of the Month.

Congrats to Zatkoff and the first place Monarchs. We’ll scheduled to have Jeff on MayorsManor later this week for a quick chat. In the meantime, links to some of his previous visits (and/or related articles) are linked below.

Clarifying the goalie situation – from LA to Kansas City to Europe