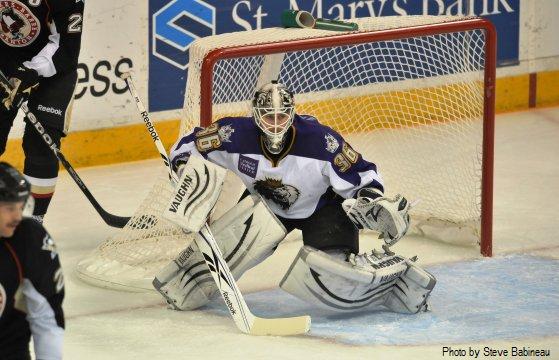 Just when you think you know the answer to the Kings goaltending depth, leave it to Jeff Zatkoff to change the question.

Originally selected by the team in the third round of the 2006 NHL Draft, it was starting to seem like he was slipping a bit in the organization’s overall rankings. Obviously, Jonathan’s Quick and Bernier have solidified their place with the big club. However, even last year – when he was thought to be the starting goalie as the season started – he saw undrafted rookie Martin Jones steal his job and make it to the AHL All Star Game.

Yet, things are back on track for the 24-year old Michigan native. In the last 48 hours alone, he’s been named the AHL Goalie of the Month and to this year’s AHL All Star Game.

Although he’s sitting on a 10-4-1 record at the moment, the season didn’t start out so well. Sure, he went to Europe with the Kings, but upon returning home he was a little rusty.

“The biggest thing for me personally was getting into game action,” said Zaktoff “I played, basically, one period during the pre-season. Then, I came in and played that first game vs. Springfield [AHL]. It was kind of like an exhibition game for me, in terms of finding my game. So, my first real game wasn’t where it needed to be and I had some things to work on still. As I played more games I got more and more comfortable, especially with the things I was able to work on over the summer. It’s all starting to come together form me.”

That’s a bit of understatement. His 2.04 goals-against average, .935 save percentage and 6-0-1 mark at home say things are going pretty well.

As for his award earlier this week, Zatkoff remained humble about his December numbers and deflected the success – “It’s always a nice personal accomplishment. But, I think as a team we’ve been playing really well, especially defensively. We do a great job of blocking shots and keeping things to the outside. It helps me be able to put up decent numbers.”

There was one guy he wasn’t afraid to call out though, Manchester tough guy Justin Johnson – whom Zatkoff referred to as ‘an ankle breaker.’ A reference he explained by saying, “He’s not afraid to shoot in front of anybody. He’s actually got the hardest shot on the team. We’re not always sure where it’s going in practice. But, it definitely hurts when it hits you. So, sometimes you take the option and let it go by you.”

Besides the team around him on the ice, it could be a few things missing off the ice that are helping his numbers too.  Last season, Zatkoff lived in a house with four of his teammates, something he claimed made him feel like he was back in college – “I was getting too old for that,” he said with a big laugh.

It’s not there were any problems within the group, just that, upon reflection, “It’s not as exciting of a lifestyle away from the rink now. We all still hang out. Hicks (Thomas Hickey), Kolo (David Kolomatis) and Jonesy – we’re all still great friends. We just don’t go back to the same place every night.”

“We’re always competitive with one another, but not in a bad way.,” explained Zatkoff. “It hasn’t affected us at all. That’s credit to Jonesy and his character. He’s a great guy. I’ve said it all along, we have a healthy competition. There’s no doubt both of us would like to play all the time. But, that’s not the way it happens – especially not in the American League, when you have a lot of guys who are capable of playing.”

Monarchs fans have seen his maturity in games this season and you can hear it when he says things like, “For me personally, it’s more about worrying what I can control. And that’s when I’m on the ice. When Jonesy’s out there, I have no control over that. Obviously, I want him to do well and win (in those situations). But, when I’m out there, I make sure that I’m playing the way I’m capable of playing. If anything, it helps me be better.  It pushes you, especially in practice, with that type of competition.”

Speaking with Zatkoff is often a roller coaster. He’ll dazzle you with his intellect and apparent inner peace, then have you laughing as he describes teammates or his love for North Carolina – a place he enjoys in the off-season because it has “unbelievable weather, great golfing and a laid back environment.”

He must not feel too out of place in New Hampshire though, judging by his stellar record when the Monarchs play at home.

“I think it’s just the comfort level, being able to sleep in your own bed and prepare a certain way,” he said. “This is my third full year here. So, it’s a building that I’m comfortable with. It’s a lot nicer to be able to show up to the rink and not have to step off the bus and play right away.”

Through it all, he still remembers the moment that launched him onto his current journey.

“I was around eight years old,” he began. “I grew up watching Hockey Night in Canada, being from Detroit. I was a big Felix Potvin fan. I remember one day my dad decided that we were going to the pro shop to get some gear. I bought all the Felix Potvin Koho Revolution gear. I looked like a miniature Potvin. None of it fit, but it’s actually the only position I’ve ever played.”

Check this guy out – a Michigan boy who went to college in Ohio.  It shouldn’t have been that surprising coming from a Detroit kid who grew up watching the Leafs.

“Well, I was a big Leafs fan because of Potvin. But the team I always cheered for was the Red Wings,” he tried to reason.

Know you no boundaries son?

“I like to push the limits and live on the edge of conflict,” he joked. “Plus, when you’re that young, I think it’s socially acceptable. I don’t know if I could pull it off now.”

But enjoy the All Star game in a few weeks Jeff. You deserve it.

Interview with Noah Clarke – pranks and memories from Manchester

Jeff Zatoff named the AHL Goalie of the Month for December