You are here: Home / comments / From tombstones to milestones – the travels of Jordan Weal 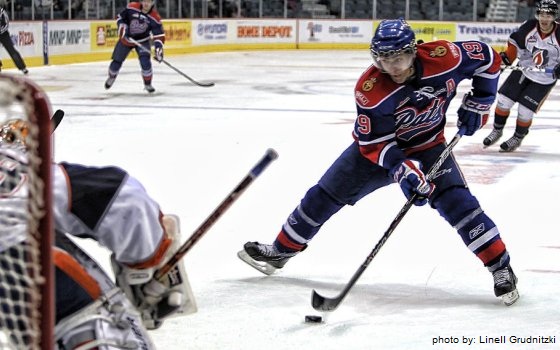 Life’s lessons often come when you least expect it.

For Kings prospect Jordan Weal, one such moment arrived a few years ago while driving down the highway with his father. “He asked me a weird question,” began the 19-year old center when we spoke recently by phone. “He asked me ‘What would you want on your tombstone if today was your day?’ I didn’t really know what to say.”

Weal went on to share that in retrospect, it may have been the moment his maturation process really took off. Although he’s openly admitted to being a selfish player earlier in his junior hockey career, he appears to be a changed person these days.

It’s something former Kings coach Terry Murray noticed as well, sharing these comments during training camp last September – “The most important thing that I saw was a player who is maturing and growing up. He’s a better teammate. He’s a really good guy now.”

Even with Murray now gone from the Kings organization, Weal still values what he was told prior to being sent back to the WHL.

“When you hear something like that from a coach, it’s really positive,” said Weal, who feels he’s made great strides as one of the leaders on the Regina Pats.  “As an older guy, you have to really be a team guy – that guy who’s in the dressing room getting everybody ready to go. Maybe when I was younger, I was trying to focus on getting myself prepared for the game instead. As a leader, you have to really focus on the team first. Then, you can worry about yourself after that.”

Upon returning to Regina last fall though, Weal found himself in some unexpected controversy almost immediately. New Pats’ head coach, Pat Conacher, wouldn’t allow him to play in the season opening game after Weal missed a video session.

“I was real disappointed. I really wanted to play,” he said. “But, it’s been perfectly fine since then. He’s been a great coach and he’s taught me a lot. I think it really set the tone for the whole team to know if a fourth-year guy can be sat down, then we all can…It was something that had to be done. He’s trying to change the culture around here and I think he’s done a really good job.”

Another thing Weal praises his new coach for is teaching the team what it will take to be a pro hockey player. Conacher played 521 games in the NHL, nearly half of them with the Kings, and he’s now preparing the next generation of players.

“He always has stories about when he played back in Los Angeles and Edmonton,” Weal remarked about his new coach. “He’s a real knowledgeable guy and he shares a lot with the team about lessons he’s learned. He’s been so many places and done so many things, it’s good to listen to a a guy like that.”

And listen they do. If not, there are consequences to pay, as Weal learned at the start of the season. For the most part though, Conacher has been teaching them how to take things to the next level.

“He always talks about doing everything the best you can,” said Weal. “Even when it comes to stretching after practice the day before a game, he wants our best. He treats us like pros in the dressing room and he wants us to give that back to him.”

On the ice, Weal is putting up another superb statistical season. He’s on pace to surpass his 102 and 96 point seasons of the last two years and is currently riding a 13-game points streak. He also leads the league in assists (53) and his 86 points are second best in the WHL. For good measure, he also leads his team in goals, assists and plus-minus – all while averaging the fewest penalty minutes per game among the regular players on the Pats.

“I’m just trying to be as consistent as I can, night in and night out to give myself and my team the best chance to win,” Weal rationalizes. “Our team is really starting to come together. We’re really getting our systems down. With a new coach this year, it took a while to transition.”

A few weeks ago, Weal picked up his 350th career regular season point (in just 260 WHL games played). He’s up to fifth all-time among assist leaders in Pats history and is on pace to move into the top-five among the franchise’s total points producers by season’s end.

Thus, there have been a lot of milestones over the past four seasons in Regina. However, when asked to pick out his favorite moment, he didn’t hesitate to mention a former teammate.

“Getting my 100th point a couple of years ago was pretty cool,” said Weal. “I was playing with Ebs (Jordan Eberle) and we were kind of sharing that because we were both in the race to get to 100. When I dished him the puck and he scored, that was pretty cool to get my 100th point and have him be a part of it.”

Interestingly, we also spoke briefly about one of his future teammates, Tyler Toffoli. Like Weal, despite posting league leading stats the last few seasons, Toffoli has been snubbed by Team Canada when it’s come to the World Junior Championships. Weal said he sent him a note after hearing he was cut from the team last month, reassuring Toffoli he was a great player and the best still lies ahead.

Similarly, Weal’s current obsession is something that’s eluded him as well – he hasn’t made any noise in the WHL’s post-season.

“We’ve had the misfortune of missing the playoffs the last three years. I think if we can make it this year, it’s going to be great for the city. They’ve been waiting for a while here. The fans are going to go nuts if we can get into the playoffs.”

From thinking about his teammates to the fans, Weal continues to expand his horizons as a player, a leader and even as a son to the parents he moved away from at 14, as his hockey dream was calling him away.

“It’s just one thing I’ve been working on, to become a better person to be around,” he said. “In the end, hockey is just a game. Life is so much more. If you can leave a good legacy behind, where you were a good person and always helped out other people, then that’s really what it’s all about.”

If he can help the Pats reach the playoffs this year, his legacy in Regina will be well established.

Toffoli – ‘My emotions will be going’ for the game tonight