You are here: Home / comments / What are Sutter and Doughty talking about on the bench? 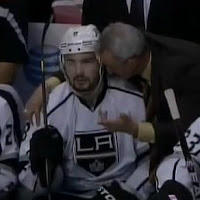 In the period leading up to Darryl Sutter being hired as the new Kings coach many were talking about his aggressive, heavy handed approach.  Yet, GM Dean Lombardi tried telling anybody who would listen at the team’s press conference last week, ‘He’s not a raving lunatic.’ In fact, to date, we haven’t seen much of the yelling and screaming that was so frequently advertised ahead of time.

One thing that has been noticeable though is his penchant for grabbing players on the bench. He practically yanked Jonathan Bernier right out of his skates following his first game behind the bench. Then, more recently, he’s been seen talking up Drew Doughty quite a bit.

So, what was he saying to the young defenseman during the game in Winnipeg?

“Just reinforcing what we’re trying to do,” said Sutter. “The skill set he has is pretty unique. So, getting him to maximize it. He was playing a lot of minutes. He played more last night than he did the night before. So we want to keep him mentally right there, every shift.”

When asked if he liked what he was seeing from Doughty vs. the Jets – compared to the four previous games – Sutter simply remarked, “He played 26 minutes.” Implying that if he had a problem with Doughty’s game, he wouldn’t have given him so much ice time.

Turning to Doughty now, here’s what he had to say about Sutter’s in-game chats on the bench…

“He’s always just trying to help. He’s never negative and if it is a negative thing that happened in the game, he’s telling you ‘If you do it right, you’re going to dominate that guy.’ So, it’s always a negative with a positive from him, which is a great thing. He really knows his game and he just wants you working hard. If you’re doing that, he’s not going to have any problems with you.”

Well, the talks certainly are working. Coming into the last game, Doughty had six points in the previous five – and the five game points streak was the longest of his career.

Later today, Doughty will be back to help us preview tonight’s game vs. the Vancouver Canucks.