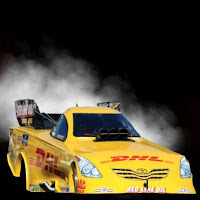 It doesn’t matter what the field is – be it acting, music, racing or you name it – if you bring up hockey and there’s a Canadian present, they’re usually quick to jump into the conversation.

Over the last few months, a few of the stars of NHRA Drag Racing have stopped by MayorsManor to talk hockey and racing. Today, we’ll share some highlights from a conversation with funny car pilot Jeff Arend.

“Of course I’m a hockey fan,” he proclaimed. “I grew up in Toronto! The winters are a lot longer there than they are in California. So, that’s what we did all the time, play hockey and go and watch hockey.”

It’s been quite the journey for a guy who first got involved in racing at the age of 17, while still north of the border. Fifteen years ago, he became the first Canadian driver to eclipse the 300-mph barrier. And the following year he began working at the prestigious ‘Frank Hawley’s Drag Racing School’ – a place many NHRA racers have used to launch their careers.

“I’m still a bit of a die-hard Leafs fan, but now that I’ve relocated out here, I like to watch the Kings,” said the San Dimas, CA resident.

Like those Kings this year, he knows all about the ups and downs that play out over a full season, as well as the struggles to stay alive in the standings.

For him and his Kalitta Motorsports team, the tide turned positive this season. For the first time in his career, Arend finished in the lucrative ‘Top-10’ in points.

Now, he has his eyes set on vying for a Championship, just like his beloved Leafs.

Knowing that the team is off to their best start in several years, Arend said, “Hopefully, they can keep it going all year long. It’s been a long time since they’ve won.”

He followed this up with an honest admission, “I didn’t realize this – being a Canadian, I probably should have – I think the Leafs have won the second most Stanley Cups ever, right?”

True. However, their 13 Cups were prior to the NHL expansion kicking off in 1967 – something he begrudgingly accepted and laughed about.

When he’s not at the race track, Arend says he tries to make it out to Staples Center to watch some hockey. As you might expect, the first game on the schedule he looks for every year is to see if the Maple Leafs are coming to town.

“I like to wear my Wendel Clark jersey to that one,” said Arend.

Like many others, he claims the Leafs-Kings series from 1993 was the best seven-game series in NHL playoff history.

He said he ‘wasn’t sure’ if the infamous Gretzky play in game six was a penalty or not. But, was quick to add – “I know Wendel beat the crap out of McSorley.”

Perhaps a small victory for the team that lost the series.

On the racing front, he also shared a few thoughts on some of this fellow funny car racers…

He had similar thoughts on the 2009 World Champion, Robert Height – “He’s just a good guy, good racer. He has his heart and soul in it and he loves to race.”

As for Ron Capps, who was on MayorsManor last month to talk about UFC, Arend said he’s easy to sum up – “He’ll drive anything that has wheels on it.”

He also shed a little light on a man who’s spent nearly his whole life in the spotlight, 17-time champion, John Force.  “We’ve become better friends this year and John really likes to have people like him. If someone doesn’t like him, he’s not very happy. He’s a very emotional guy (when) involved in racing. But, obviously, a real people person.”

However, Arend’s most revealing comments came when sharing what he had learned about himself in 2011 – “As a driver, I think it was probably the best year I’ve driven. I’ve learned some more things, like pedaling these cars is very hard to do. The only way you get better at it is through experience. I’ve definitely gotten better at it this year, my lights have been pretty solid all year and our team really gelled together. We didn’t change a whole bunch, just been getting better and better and better – picking away at it. It just goes to show, if you stay with the core group of guys, it’s going to get better.”

So, one final question, if the Kings were to meet the Leafs in the Stanley Cup Finals, who would he be rooting for?

Kings vs Maple Leafs – Reliving 1993, when mullets were cool