You are here: Home / NHL / Kings / Making the case for Darryl Sutter as coach of the LA Kings 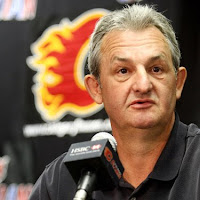 Life at the top is hard.

It doesn’t matter if you’re the CEO of a major corporation, a head coach in the NFL or the GM of the LA Kings.

The reason those people get paid big money is to make big decisions.

There’s a sign in Dean Lombardi’s office at the Kings training facility in El Segundo that reads ‘When bluffing, a pair of balls beats everything.’

Reports suggest that within the next 48 hours the Kings will be announcing Darryl Sutter as their next head coach. While that may not be a bluff of any sort, it may take a brass set to make that decision. After all, Sutter will quickly be labeled as a ‘retread’ and a ‘repeat of past mistakes’ or some other tired cliche.

Many other articles over the next few days will tell you why Lombardi should have hired this guy or that guy. But, the fact remains, if Sutter is the coach, none of that matters. So, instead of playing the ‘should have been’ game, let’s look at why Sutter is a good fit for the team.

First off, the familiarity. The Kings enter tonight with 30 points (13-12-4) through their first 29 games played. If they’re shooting for a 100-point season, that means they’ll need to earn 1.32 points-per-game played the remainder of the season, which is quite a jump from the 1.03 points-per-game pace they’ve been on. If this were the summer, perhaps the Kings could gamble on a young, unproven coach and play for the upside.

However, Lombardi doesn’t have the luxury of playing with ‘house money’ right now. It’s nearly the middle of the season. Time’s a-wasting. The new coach needs to hit the ground running and the GM doesn’t have time to get to know somebody new and understand their system and style as they move forward together. Time is of the essence. He needs to grab somebody, lock arms and jump in the foxhole. Thus, the devil you know is better than the one you don’t. Making Sutter one of the few guys to get on the ‘short list.’

Second, winning. Ownership spent a lot of money this off-season and the time to win is now, right now – as in, this season. Younger, unproven names may be sexier to the average fan, but the resume of Darryl Sutter points out that he knows how to win in the NHL – not that he might be able to win. Sutter’s teams have won 40 or more games five times, he improved his record in San Jose four years running, he took the Flames to the 2004 Stanley Cup Finals and won his division with 103 points in his last year behind the bench (2005-06).

Finally, accountability. There is no denying that some – perhaps even the majority – of the Kings failings this year falls on the shoulders of the players. This team will live and die by the performance of 10 players – their top six forwards, plus Jarret Stoll, Drew Doughty, Jack Johnson and Jonathan Quick. Of that list, the only one you can immediately not fault is Quick. I would give Johnson a pass as well. His plus-minus rating has improved over past years, the goals are there too. The only thing he’s missing are the assists and we’ll say that’s more on the others for not scoring.

So, for all the talk about a ‘player’s coach’ or something similar, go back to what many of the players talked about before the season started – ‘This team has the talent to win the Western Conference.’ What they’ve shown is they need a coach to hold them accountable.

Lombardi went ‘all in’ this summer by making the trades and signings necessary to improve his roster. Now, if as expected, he’s about to double-down with Sutter behind the bench.

Even if it’s not the decision you would have made, it’s a decision that’s easy to understand.  And more importantly, probably gives them the best shot – or least as good as any other coach would – of saving the season.

If you disagree, start at the top and read the article again.