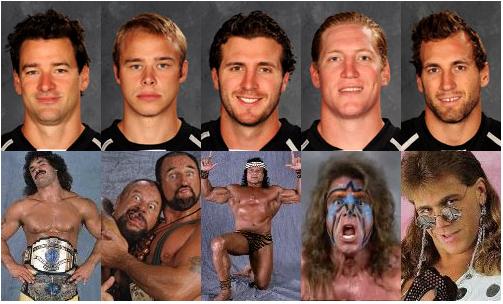 With the Kings in Toronto today to play the Maple Leafs it’s only fitting that we work in a little pro wrestling. After all, the capital of Ontario, Canada is one of the strongest markets in North America for action inside the squared circle – including hosting WrestleMania VI (Hulk Hogan vs. the Ultimate Warrior) and WrestleMania X8 (Chris Jericho vs HHH and Hulk Hogan vs. the Rock).

Dustin Penner, who has long since been outed as a wrestling fan, subtly hinted at a possible heel turn himself a few weeks ago in an article here.

Now, he’s back – this time to re-imagine his teammates as pro wrestlers. Here’s who he thinks some of the LA Kings could have been if they weren’t hockey players…

Dustin Brown – one of the Bushwhackers

When asked why Snuka, Penner said “He’s regular size in stature, but he’s quick and agile. I could see him coming off the top ropes.”

That answer was a little stunning, as they are polar opposites – to which Penner replied, “Yeah, but they’re both showmen. And Matt Greene is a showman.”

To read 10 Tidbits on the Hockey-N-Wrestling connection, click here.  One of the items listed is that the above mentioned Chris Jericho, a former WWE Champion, is the son of one of the original Kings from 1967 – Ted Irvine.

Also, if you’d like to see an exclusive picture of Kings defenseman Drew Doughty and forward Trevor Lewis dressed up as the Hart Foundation for Halloween this past October, click here.  Brett Hart liked it so much he tweeted about it when it was first posted.