You are here: Home / comments / Dustin Brown on what the Kings used to win tonight 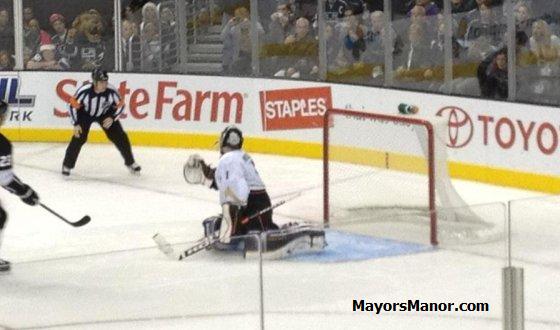 Dustin Brown‘s last two games have perhaps been his best back-to-back performances this season. He played over 22 minutes in tonight’s game, second only to Anze Kopitar among the forwards, and – like on Monday vs. Toronto – he scored a goal in regulation and added one in the shootout as well.

He now has four points in the last four games (three goals, one assist) and his six hits led the team tonight vs. the Ducks. That also gives him 37 hits in the last seven games. For good measure, he also led all players in the game with five shots on goal.

Back in the dressing room, following the Kings 3-2 win, he had this to say…

On the overall game – “Right now it’s about getting points. That’s the most important. Secondly, we’re starting to put good games together…you look at the stats like O[ffense} zone time, you’re starting to see guys hold onto the puck more. That’s two fold. When you’re spending more time in their zone it wears them down a little over the course of the game. At the end of the day, it keeps our defense pretty rested. We have some guys back there that play big minutes. When they can catch a breather for two or three minutes in a row while we’re cycling and working hard, it pays dividends for those guys.”

On the shootout – “I’ve been struggling the last year and a half on my shootouts, so I’ve just been working on it a little more, simplifying my moves…I was going to go exactly where Stolly [Jarret Stoll] went and I felt like he [Ducks goaltender Jonas Hiller] was shading that side of the net so I just switched it up at the last second there.”

On his goal in regulation – “It might not have looked like much, but the pass that Kopi gave me, I don’t know if a lot of guys can do that. It’s a three foot pass that goes a foot in the air and lands flat. I just got into position to shoot and he put it in the right spot.”

Head coach Darry Sutter added this on the overall game – “Hard fought game. I thought we had a good start, we did a lot of good things…I liked the way our forwards played, really good in all three zones. That’s what we’re trying to do…I think we moved the puck pretty good… [Willie] Mitchell, [Matt] Greene, [Jarrett] Stoll, [Mike] Richards, [Anze] Kopitar did a really good job at killing penalties. I think our forwards were all really good; I don’t think it’s based on who scores the goals. You have got to work together. Brown’s goal was a great play by Kopitar.”

For more Kings-Ducks notes, be sure to check out the related articles linked below.  The list also features an interview with Brown from a few weeks ago where he explains why his hit totals were down during the early part of the season.

Mike Richards on his return vs. the Ducks and early impressions of coach Sutter

Dustin Brown on Corey Perry ‘milking it’ and the Hockey Gods