You are here: Home / comments / What I’ve learned so far… by Pittsburgh’s Steve Sullivan 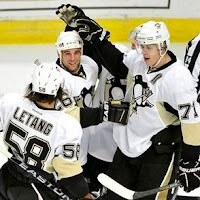 Over the past month, many of the Los Angeles Kings have been featured in a new series here, titled ‘What I’ve learned so far…’

It’s brought memorable quotes and tidbits – such as, team captain Dustin Brown is a self admitted geek (or a nerd, depending on who was being interviewed at the time), Trevor Lewis likes heated toilet seats, Brad Richardson is proud of his golf game and…well, Mike Richards is just all around good guy.

Today, we turn our attention to the visiting locker room. Up first, is Steve Sullivan – a speedy forward, perhaps best known for his six seasons in Nashville.  However, last summer, he signed with the Penguins as a free agent.

After the morning skate today, I asked him what he’s learned so far…

About James Neal – “He can grow some good facial hair.”

About Paul Martin – “Underrated. I knew he was a good defenseman, but playing with him on a daily basis you really realize how a lot of the things he does don’t show up on the score sheet on a regular basis.”

About Tyler Kennedy – “He’s exactly who I thought he’d be. He’s from the Soo, enough said.”

About the Eastern Conference – “We’ve played 14 games and I think nine of them have been against Western teams (note: no, only five). So, that’s a tough question for me to answer. It feels like I’m still in the Western Conference with the travel we’ve had. We started out on the west coast in Canada for three games, we played in Minnesota and now we’re on this trip here. So, I’m looking forward to the Eastern Conference schedule!”

The final question doesn’t necessarily fit the format for this series, but it’s always asked when he’s in town. What is it about LA that seems to bring out the best in him?

“I have no idea,” said Sullivan. “I don’t know why, maybe deep down I love California (at this point, one of his teammates started heckling him, ‘Hollywood, right here,’ pointing at Sullivan). I’m not sure why it is. I enjoy it here and I’m really hoping I get another goal tonight.”

Earlier today, Pittsburgh assistant coach Tony Granato was on MayorsManor.  Among the many topics was Sullivan and the role he’s playing with the Penguins this season.  Check that interview out here or see some of the related articles posted below.

What I’ve learned so far… by Kings goalie Jonathan Bernier