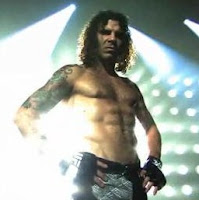 Through the years, we’ve had a variety of celebrities and athletes on MayorsManor – like Greg Hetson of the band Bad Religion, Hall of Fame pro wrestler Nick Bockwinkel and Dodgers’ left fielder Matt Kemp – to talk about a myriad of subjects.

With the UFC in town for a big fight card this Saturday night, we spoke with lightweight title contender Clay Guida after today’s presser downtown. And, like usual, the conversation found it’s way back to hockey.

MM: Let’s start with your mom, she’s always cageside when you fight. What’s the best or worse advice she gave you growing up?

Guida: ‘Don’t put your hands on someone unless you have a good reason for it.’ She would always tell me, my brother and sister growing up, ‘Keep your hands to yourself.’ So, it’s funny – that’s what I do for a living now, I get to put my hands on other men. Competitively! (then he laughed quite a bit)

MM: How did that work out with Jason then, your older brother?

Guida: I was his wrestling dummy my whole life, still am. (more laughter)

MM: The UFC has fight night bonuses for best fight, best knockout, etc. and Chael Sonnen recently created quite a buzz with his ‘loser leaves town’ challenge to Anderson Silva. What type of bonus would it take to make your fight with Ben Henderson a hair match (loser gets his head shaved)?

MM: What area have you concentrated on while preparing for Ben Henderson?

Guida: A little bit of everything. We’ve been dedicated to watching a lot of film on Ben Henderson, his timing and movement, stuff like that – watching his level changes and seeing what he did differently against Anthony Pettis and against Jim Miller, Mark Bocek, things like that. He’s strong and he’s dangerous in several positions. He’s dangerous on top, he’s hard to submit. He has a good clinch and he has good cardio. So, we’re pretty tough on all those positions too.

MM: Your manager was in the news recently, talking about the fact that regardless of how long the main event goes, your fight will not be shown on FOX this Saturday. Does that bother you or you don’t even care at this point?

Guida: It motivates me more. Five years ago I was on the undercard fighting to try and get on the broadcast and five years later I’m on the undercard again. I’m more dedicated and more passionate for the sport now as I ever have been.

MM: How do you size up the main even on Saturday between Cain Velasquez (the Heavyweight champion) and Junior Dos Santos?

MM: We’ve seen you in the crowd at a lot of UFC shows. But, what happens on a night like Saturday, when you’re on the card? Do you just catch the fight on DVR the next day?

Guida: No way. I’m as big of a fan as I am a competitor. I’m going to be glued to that TV in the locker room with my coaches, watching it and cheering on both guys. Hopefully no one gets hurt and hopefully we get a good fight.

MM: You’re from Illinois, do you follow the Blackhawks at all?

Guida: Absolutely. As of the last couple years, my wrestling coach and I have been going to some Blackhawks games with my buddies. I’ve taken more of a liking to it now that I understand the game a little bit more. Seeing it live makes it a whole different story. It’s one of the most exciting sports out there. I say this truthfully, I think players are the most well rounded and the best athletes out there. They’re huge, they can move, cut on a dime, they go on a full on sprint and they can skate backwards. I can hardly walk backwards. They’re just phenomenal athletes. They’re heavy hitters and they’re very dedicated. I love it. Blackhawks baby!

Guida’s fight this Saturday will be part of the preliminary card presented on FOX.com. The main event – a heavyweight title fight between Velasquez and Dos Santos – will be on FOX network TV.

Coincidentally, the UFC’s debut on FOX will be on the 18th anniversary of the first ever UFC card, held in Denver, Colorado in 1993.