You are here: Home / comments / Scott Parse, Terry Murray and their ‘issues’ 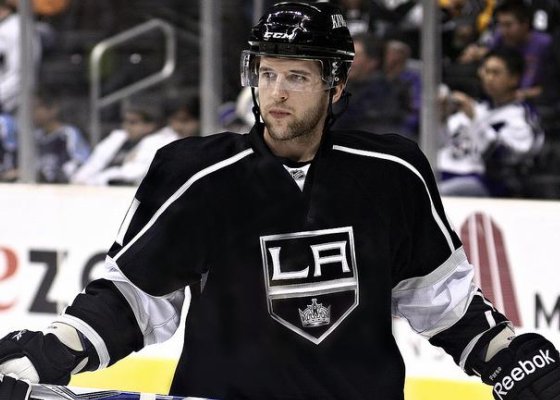 Left wing. If only solving the Kings’ challenges at that position was as easy as typing those eight letters.

Last year, Scott Parse missed nearly the entire season due to hip surgery. A December trade for Marco Sturm wasn’t the answer. A February trade for Dustin Penner yielded few points. And then, Ryan Smyth asked for a trade over the summer.

It’s been challenging to say the least.

His march to the dog house during training camp was well documented here on MayorsManor. And just a week ago, Parse was on the sidelines, talking about having to wait his turn.

Then, he slipped into the line-up last Thursday.  After practice today, he reflected on the joy of hearing he was going to play vs. the Stars.

“Very excited,” was how Parse described the news. “No one likes sitting out. So, it was nice to get back in there.”

Not only did he play, but he picked up a goal too.

“Goals are nice. I haven’t scored in a year. So, that felt real nice,” said Parse. “You don’t really think about it at the time though. The injury’s in the past. You just think about the game. I was thinking about what I had to do for the next shift. I’m just kind of in the moment out there.”

He remained on the second line with Mike Richards and Dustin Brown for the next two games as well. After another goal in Colorado, he came home with two goals in three games.

However, he was thinking big picture when talking about his individual performance – “Unfortunately though, we didn’t get more points out of the trip,” said Parse.

So, now what?   Parse had previously said there wasn’t much feedback in the week or so leading up to his return. How about over the last few days – especially now that he’s played in three straight games?

“‘Just keep doing what you’re doing. Make sure you’re skating and creating things out there.'” is what he says he’s been hearing from Murray. “That’s what I have to do to be successful.”

Parse could perhaps best be described as someone who let’s his actions do the talking.

Murray, well, he uses words with a little more frequency…

“I kind of liked what Parse has given me here,” Murray began. “I know it’s been a bit of an issue with him, and with me. I’m trying to be very understanding of what he went through in the off-season with the hip surgery. And it does take time. Most important – and for the players in that position to understand – is to get through that, and I’ve said this before, don’t begrudge your time in the trenches, where you’re out of the line-up. Continue to work hard to get yourself back to a level of play. I think he started to buy into that the last four or five days that he was out and doing all the extra work to get skating. It’s paid off for him. He scored a couple of goals, the line started to show a little bit of chemistry. He’s a player who, I think, has a great skill set and can give us that secondary scoring that we’re constantly looking for as a team. So, it’s moving in the right direction.”

If you missed Murray explaining his recent conversation with Penner and his plans on how to use him for the time being, click here to read now.

Also, be sure to vote here – who do you think was the LA Kings Player of the Month for October?

From high in the sky, Murray and Penner like what they see

the above photo appears courtesy of C. Ikiri