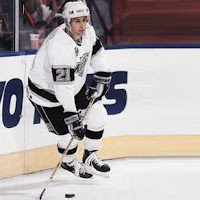 It’s too bad the Kings won’t be wearing their white jerseys tonight. Sans the logo on the front, they’re like modern versions of what Tony Granato wore with the team during the 1993 Stanley Cup Final.

Nearly 20 years later, he’s back in town for tonight’s game at Staples Center. It’s a building Granato played in only three times – not as a King, but as a member of the Sharks at the end of his career (coincidentally, a team he was signed to by then-San Jose GM Dean Lombardi). He’s also coached a few games in LA, first with Colorado and now with Pittsburgh.

After the Penguins’ morning skate today, we spent a few minutes one-on-one. Here’s what Granato had to say…

On playing in LA, against his former team – “It’s always nice to get back and see some friends. I have a lot of good memories from being part of this organization. When you come here and see the state of the franchise, they have some tremendous players and it looks like they’re real close. So, it’s exciting for me to see how well they’re doing.”

On Mike Richards – “He’s an elite player and a great competitor. The more physical you try to be on a guy like that, the more intense and the more he gets into the game. So, I think being under control defensively against him (is important). You need to be aware of when he’s on the ice because he can beat you so many different ways. He’s a great asset to the organization and it was a great trade for them.”

On Simon Gagne – “He’s a guy who beat us in the playoffs last year, so we know him really well. I think he’s one of those guys who you have to be aware that anytime he gets the puck in a scoring area, he’s a tremendous goal scorer. When you add depth like that to our organization it makes the other guys that much better.”

On playing a Kings team that hasn’t scored many goals recently – “Any time you struggle a little bit, it’s not because you aren’t playing well. I know they aren’t happy with how they played in their last game vs. Edmonton. But, if you look at how they’ve played all season, they’re an aggressive team, they attack, they have great offensive skill and they create a lot of offensive chances. So, it’s important for us to be very solid defensively, be respectful when their big guys are on the ice and respect what all four of their lines can do and what they can bring.”

On the difference in James Neal this year, who had just one goal after being traded to Pittsburgh by Dallas last season – “I think he played really, really well for us last year. But, when you get a guy who’s a goal scorer and you look at the score sheet at the end of the night and he doesn’t have any, you’re thinking things are wrong. Well, his performance, his effort and how he played, he did a ton of things right for us. This year he came into camp and got to start over, get refreshed statistic-wise. When you get more comfortable being in the organization you’re in and more familiar with the players you’re going to play with, you’re going to feel better about yourself.”

On Steve Sullivan‘s past success against the Kings – “We don’t go back in history too much to see how players have played against other teams. Steve’s been very good in the role we’ve asked him to play. We have him playing with Evgeni Malkin, somebody who needs a player that can think the game like him. I think they’ve created a lot of space for each other. So, he’s fit into our organization very well and has done what we expected him to do. The pucks haven’t gone in for him. But, he’s creating chances every time he’s out on the ice and it’s only a matter of time before stuff starts going in for him.”

For the record, Sullivan has 34 points (11 goals, 23 assists) in 39 career games vs the Kings. In Los Angeles specifically, he has eight goals in 16 games at Staples Center.

I spoke with Sullivan this morning too and that interview will be posted shortly.