You are here: Home / comments / OHL vs. Russia – a Super Series report from Tyler Toffoli 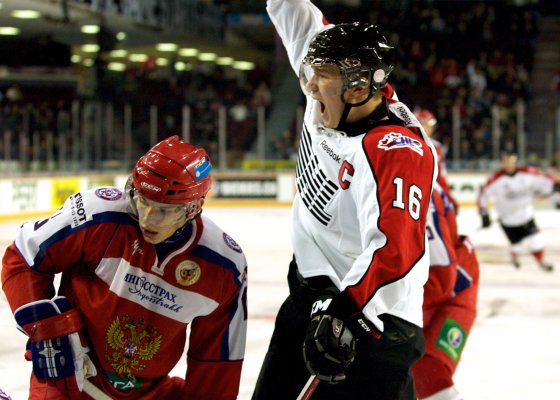 On Thursday night, game three of the six-game Super Series took place in Ottawa. It’s an annual junior hockey showcase, featuring an All Star team from the three CHL junior leagues (WHL, OHL and QMJHL), each playing a pair of games against a Russian squad of similar aged players.

You can also think of it as a tune-up for the World Junior Championship (WJC) and/or a preview for the upcoming NHL Draft. Just don’t make the mistake of thinking the games don’t count. Russia won the series last November and went on to win gold at the WJC a few months later.

For the third year in a row, Tyler Toffoli – one of the Kings top rated prospects – participated with the OHL group. Going into the game this year though, something interesting happened.

“My trainer in Ottawa was organizing everything and when he received all the jerseys, the ‘C’ was on mine. He let me know, but I didn’t really believe him at first,” said Toffoli, always mindful of the many pranks being played within the world of hockey.

“A couple of equipment guys and other people said it was true. Then, after it came out on the OHL website, that’s when everybody starting texting me.”

As if being named Captain wasn’t enough pressure, the game was also being played at his home arena in Ottawa.

“It was the first time I had a letter (being the captain), plus it was at home. The barn was packed, it was a pretty good crowd,” explained Toffoli. “I wanted to do well and I wanted to win. So, it was a different pressure than what I was used to the previous years.”

Another difference he noted this time around was the play of the Russian team. The match-up was something people were watching closely because prior to last year, the OHL team had never lost a game to the Russians.

“I think this year was the best of the teams I’ve played against,” said Toffoli, despite the OHL beating them 10-7 on Thursday. “They had a lot of skill, they were really fast and they made a lot of plays.”

“On the first one, we were on the power play and it was a break out. I got the puck wide, I dropped it and I took the hit. The person I dropped it to made a nice pass and then we scored.

“The other assist was in the third period. It was a two-on-two and my teammate dropped it to me. Both their d-men came to me and he just went to the net. I sauced it over and he put it in. Both of them were pretty nice goals.”

Due to his regular club, the Ottawa 67’s, already having three games scheduled this weekedn, he won’t be competing in the rematch with Russia on Monday – just one Super Series contest for Toffoli this year.

And speaking of one game, that’s exactly how many NHL pre-season games he was able to get into before the Kings released him back to his junior team in mid-September.

“They were really happy with the progress I’ve made,” is what Toffoli says Kings’ management told him at the time. “From my first training camp to this camp, they said they were really happy with everything and that I’m on the right track. They said to come back (to the OHL) and just do what I did last year, play the way I play and score lots of goals. They wanted my team here to win. They want the 67’s to be successful and for me to learn the winning ways. So far, that’s what I’ve been doing and it’s been good.”

Despite his always positive attitude, he admits to being a little disappointed he wasn’t in LA just a little bit longer a few months back.

Upon his return to Ottawa, he immediately spotted the difference between playing with men and boys.

“I first noticed it in practice. When I was in LA, the passes were right on the tape and they were hard. It felt like the practices were so clean. Then, you come back (to Ottawa) and guys are missing passes or they’re way behind you and stuff. I think it was less crisp in practice. But, in the games, I knew it wasn’t the same level. So, I knew it would be a little bit different.”

Last weekend, he should have played fellow Kings prospect, Michael Schumacher of the Soo Greyhounds. However, the big Swedish power forward missed the entire weekend with a lower body injury.

“I was excited to see how he did,” said Toffoli. “I had heard pretty good things about him this season and I was hoping to get the opportunity to play against him.”

It didn’t happen though and they’re only scheduled to faceoff once more this season, in early December.

Looking ahead to tonight, he could be facing off with yet another future Kings power forward. Andy Andreoff will have his Oshawa Generals ready to go when they host the 67’s.

Still, in addition to going at it on the ice, they’re slowly forming a bond off of it as well.  “We talked before the game when we played them earlier this season. So, we have a pretty good friendship, I guess.”

About a month from now, Toffoli should be getting ready for the biggest tournament of his life, the World Junior Championship.

“It comes up in conversation all the time with the local media,” remarked Toffoli. “Obviously, I want to play for Team Canada and that’s my goal. That was one of my top goals coming back to junior (hockey) this year. I’m going to do the best I can and hopefully I get invited to the (December) camp and play really well.”

He will make the team. Canada needs Toffoli and it’s nearly a universally accepted fact they messed up by not including him on the roster last winter.  Many have even wondered if Canada would have won gold had he been one of their forwards. We’ll never know.

Regardless of how it all shakes out at this year’s WJC, expect Toffoli to be back on MayorsManor to tell us all about it.

Only one other Kings prospect will participate in the Super Series this year, that being Jordan Weal of the WHL’s Regina Pats.  More on that next week.

special thanks to Valerie Wutti for the above photo