You are here: Home / hockey / Nashville Predators at Kings – pregame primer and contest 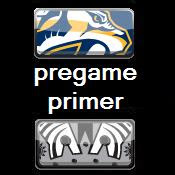 It’s the third game in four night for the Kings and things won’t be any easier than they have been recently.

Jonathan Bernier needs his first win of the season. Drew Doughty and Dustin Penner need their first goals. Anze Kopitar needs some help. Terry Murray needs to see a sign of life from his club that extends beyond the random 10-minute stretches he’s seen of late. GM Dean Lombardi needs all of the above and more.

– Bernier: When a goalie has only played 34 games in the NHL it’s hard to talk about his ‘best numbers,’ but here something stands out. Bernier has played five games vs. the Preds, going 4-1 with a 1.80 goals-against average and .940 save percentage. If you like trends, take note that Bernier has also posted a .98 goals-against on Tuesdays – his only day of the week with a number under 2.00. Three of his four career shutouts have been on…yes, Tuesdays.

– Pekka Rinne: The Preds goalie is often compared to Jonathan Bernier, as their numbers have been almost identical to this point in their careers. Last season, Rinne lost two games vs. the Kings and posted his worst numbers against any Western Conference opponent (4.68 goals-against average and .821 save percentage). Perhaps that’s why Anders Lindback will be in net tonight and not Rinne.

– Ethan Moreau: Nashville has historically been one of the Western Conference teams he performs the best against. In 43 career games vs. the Preds, Moreau has 10 goals. Is tonight the night he picks up his first as a King?

Tonight’s game is scheduled to start at 7:30pm PST.

We’ll also have post-game notes from the Kings locker room and Terry Murray’s presser immediately following the game.  Link to us on twitter or facebook to get those comments in real time.

Then, along came Jonathan Bernier