You are here: Home / comments / Mike Richards on ‘that play’ in Dallas and postgame mood 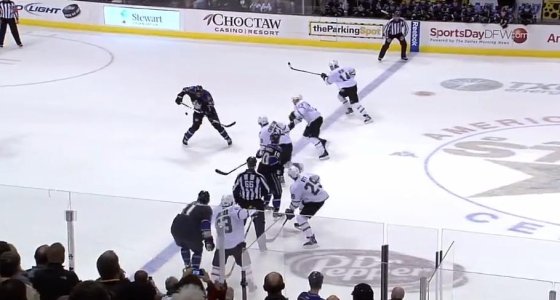 With Ethan Moreau in the penalty box and 25 seconds left on the game clock Wednesday night, the Kings and Stars lined up for a faceoff in the neutral zone. Having already pulled their goalie, Dallas placed six skaters in a formation that looked like a team lined up for up an onside kick along LA’s blueline. Mike Richards skated in for the faceoff…

“I kinda had an idea what they wanted to do,” said the 26-year old center. “But, that makes it a lot tougher when it’s six-on-four. There’s not a whole lot you can do, I guess. I just missed what I was trying to do on the faceoff. The puck turned over pretty quick and it got caught up in (Willie Mitchell‘s midsection), just a comedy of errors. They made a good play. But, you don’t see that very often. The stars have to align from them to do that.”

Coming back home, what was the mood – happy about getting three out of the four points or upset about losing in overtime?

“I think you’re disappointed when you lose, especially in that manner. But, you can’t dwell on something like that. You have to be encouraged by what we did on the road trip and get ready for tomorrow’s match.”

If you missed Moreau and coach Murray sharing their opinions on the slashing penalty that led to the above situation, click here to read the article posted earlier today on MayorsManor.
Up next, Doughty talks about the draw, the goal and how the Kings prepared for the situation.