You are here: Home / comments / Mike Richards might hold firm rather than change 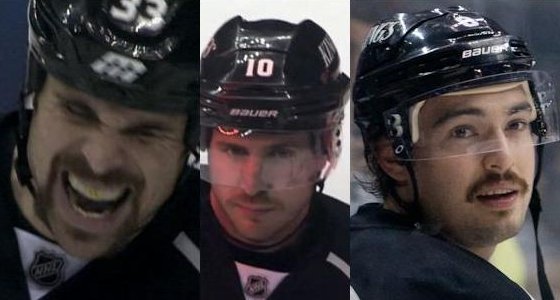 Drew Doughty hasn’t hidden what his plans are for tonight. They’ve been set for several weeks now.

The same can’t be said for his former defensive partner though. In an an interview posted on MayorsManor yesterday, Willie Mitchell talked about possibly keeping his Movmeber facial hair a little longer, saying a few teammates have complimented him on it – even though he looks like a combination of somebody from the Village People and/or a dark haired Hulk Hogan.

Meanwhile, Doughty is probably shaving his ‘stache off right this minute.

After practice today, I asked Mike Richards if he’s ready to do the same now that November is drawing to a close.

“I’ll do it at some point, I don’t know when,” said the Kings leading goal scorer. “We’ll see if I keep it through the night.”

So, it might make an appearance at the game tomorrow?

“There’s a chance, if I don’t get fed up with it between tonight and tomorrow night. Then, I guess it will stay for at least another game,” he said while laughing.

Apparently he gave it some more thought later this afternoon too because a few hours ago he thumbed out this tweet – “I know Movember is over tomorrow but thinking about keeping the stache. #superstitious”

If it was the ‘stache that was bringing him the good luck, he should definitely keep it. Richards has scored nine goals over the Kings last 10 games.

Putting that aside though, given his admitted bromance with Mitchell, do you think they’ll consult each other on the shave-or-don’t-shave dilemma? Or will they each decide on their own?

Guess we’ll have to wait and see what tomorrow brings.

Mitchell and Richards and their bromance

Movember pics of the LA Kings – featuring Doughty and Penner

What I’ve learned so far this season… by Mike Richards

note: the above images appear courtesy of Mike Zampelli (LetsGoKings) and The Royal Half