You are here: Home / comments / LA Kings Kevin Westgarth recalls many of his key firsts 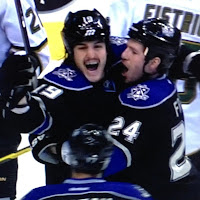 Chalk one up for the good guys.

With just over five minutes gone by in the second period of last Wednesday’s game vs. Dallas, Kevin Westgarth picked up his first National Hockey League goal. And as the saying goes, it couldn’t have happened to a nicer guy.

Sadly, the Kings ended up losing the game – in what Westgarth called ‘a pretty unfortunate, crappy ending’ – which dampened the evening. Even though that took some of the buzz out of the milestone and his teammates weren’t necessarily in the mood to celebrate afterwards, it’s a moment that wasn’t lost on the big, tough forward.

“That one will be going back home,” said Westgarth when asked where the puck is. “I’ll probably give it to my parents. They seem to take care of that stuff pretty well. They have a few jerseys and it will be another puck to add to the collection. Each level you move up and you keep that puck. So, it’s a nice one.”

It took 73 games to get that first one in the NHL.  What about those other firsts though? Westgarth recalled how a few of them went down…

His first ever goal – “I was five years old. It was in the championship game of our house league. It was the only goal I scored all year. So, like Gretzky, I had one goal my first year in hockey. In my mind, it was a swooping down the wing, dipsy-doodle and around two guys. I don’t think it was quite that pretty in real life. My parents tell me it wasn’t, so that just ruined my dream.”

His first goal in college, at Princeton University – “I was just driving through the middle of the net. It was a two-on-one, a perfect little touch, back door and it slid it in the net. I didn’t screw it up too bad, so it went in. It was pretty nice, that was against Dartmouth I think.”

His first pro goal, with the Manchester Monarchs – “I want to say my first goal was against Hartford, where it was a nice pass on my backhand and I was kind of swooping in, pulled it back and feathered it over Al Montyoa‘s shoulder. But, unfortunately, I don’t think that was the first one. That was the most memorable one because it looked nice!  You like to remember those ones. The other ones, (well) a lot of them were within two feet of the net.”

Longtime readers of MayorsManor may recall that last season one of our sit down chats with Westgarth was interrupted by Kyle Clifford and the two made a friendly wager over who would get the first Gordie Howe Hat trick (a goal, assist and fight in the same game). It still hasn’t happened.

Did Westy have a Gordie back in Manchester?

“I believe so – wait, you know what, I don’t know. I had a few games with two points, which is kind of the sad thing. I don’t know if I ever did,” said Westgarth.  “Maybe it was one of those things where if I scored two points, it means we were up by quite a bit and we didn’t need the fight. But, I think I did actually squeeze one in there against Springfield. One of their guys came after me towards the end of the game. So, it was pretty easy to oblige. He was like a new guy, who was trying to get into a fight – which worked out pretty well for me.”

Finally, with apologies to Bob Miller, who better to call his first-ever NHL goal than…Westgarth himself. Take a listen to him doing the play-by-play of how it all went down…

What I’ve learned so far this season… by Kevin Westgarth

Cheering for the wolf pack with Kevin Westgarth