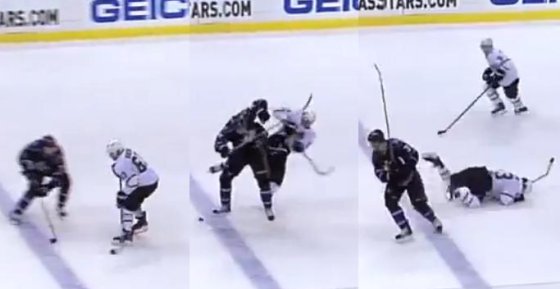 In fact, in took Ribeiro several seconds to get up and get off the ice under his own power. However, his coach proclaimed him ‘just fine’ after the game and yesterday he was reported to be completely normal, without any signs of a concussion.

If you’re the Kings, you would assume they’d rather take their chances with Ott at the other end than Ribeiro – who has 41 points in 42 career games vs. the Kings.

After practice today I asked Johnson if there were any smaller, less noticeable things going on between he and Ribeiro throughout the game.

“No, that was something that just happened,” said the Kings defenseman. “He caught a pass in the middle of the ice and I didn’t really expect him to cut back into me. It was more of, I was just going to pressure him. When he cut right into me, I figured ‘Why not?’ and it just ended up that way. But, there was no intention of going after him or anything. That was just the way it played out.

It had to feel good though to lay such a solid hit on a guy who’s caused lots of problems for the Kings in the past though, right?

Up next, comments from coach Terry Murray on the hit and ensuing goal.

10 Tidbits on the Kings come from ahead loss in Dallas

Murray on Doughty – ‘It’s important that we find the answer’

Kings coach Murray – ‘Jack and Doughty are coming of age’