On Tuesday, October 25, there may have been some other players dressed up as the Kings because coach Terry Murray‘s team just didn’t look like themselves in a 3-0 loss at home to New Jersey.

A few nights earlier though, the Kings did actually trade in their sweaters for a variety of different costumes at the team’s annual Halloween Party.

In something that sounds more like a joke – but it’s the truth – the big winners of the night were Simon Gagne and his wife, who dressed up like clowns. “They really went all out,” said forward Trevor Lewis, while defenseman Matt Greene called the pair “awesome.”

Apparently, it was so good they won the ‘award’ for best dressed – a small ‘Emmy-like trophy’ according to Jarret Stoll.

Several players commented they also liked Rob Scuderi‘s choice of outfits (he and his wife came as Duff Man and Marge Simpson). Another popular get up was worn by captain Dustin Brown, who showed up as one of the tight-clothed officers from Comedy Central’s Reno 911.

However, the always sharp dressed Stoll had high praise for an unlikely forward, one who barely ever shows a personality to the media and is known for being a man of very (and we’re talking VERY) few words.

“One of the better costumes, for us, was Scotty Parse dressed up as Willie Mitchell,” said Stoll. “Before games or practices, he (Mitchell) always has on Under Armor shirts with tight, tight spandex. He’s always pigeon toed and he wears some red Franklin batting gloves. So, Parse stole those and he had them on. He was wearing Mitchie’s sandals too. It was Mitchie’s whole look, definitely one of the funnier ones.”

Mitchell said he got a big kick out of it and was still laughing at Parse when we talked about things after practice.

What did he dress up as?

According to Colin Fraser, Mitchell was dressed up as bird. Not sure of the story there (maybe Drew Doughty’s fear of birds?), but Jonathan Bernier thought it was hilarious.

In turn, Lewis thought Bernier brought a creative twist to the night. He and his date came as…let’s call it John and Lorena Bobbitt. While laughing, the Kings second year goalie explained their choice of costume like this – “I had a sign that said ‘Just got engaged!’ So, pretty much, I can’t do anything anymore.”

In the days after the party, Alec Martinez had already revealed to us that Justin Williams “made a mean Pauly D.” He brought ‘Snookie’ with him to the party too, which probably made Mike and Vinny jealous.

When we asked Lewis who had the best costume though, he must have been channeling his inner Brad Richardson when he said – “I would say ours was up there,” referring to the wrestling tag team he formed with Doughty.

Greene agreed for the most part – “I really liked the Hart Foundation, Owen and Bret Hart. I thought that was great. I’m a big fan of the wrestlers. I really wanted to see them bring back Jim ‘the Anvil’ Neidhart though. They asked me who he (the Anvil) was and I said, ‘OK, that sums it up right there.'”

Regarding the blond wig Lewis went with (pictured below), Greene had this to say – “I think it was Lewie’s attempt to go with Owen Hart. But, Owen never really had the long hair. So, he looked a little more like Twister Sister and Dee Snider.”

Still, he wore pink tights, points for that, right?

“I thought the boots were the most amazing part,” said Greene. “Wrestling boots are really tough to find. I’ve looked into them. A few years ago I was Randy ‘the Ram’ Robinson (Mickey Rourke’s character in The Wrestler). I couldn’t find any though and ended up wearing some white high tops instead.”

This year, Greene went a completely different route. He and his girlfriend came as Hall and Oates.

Don’t expect to see any pictures of them as the 80’s musical duo though. According to Greene, there aren’t any photos of them because, in his words, “I don’t need any pictures, I was there.”

Yet, these two exclusive images did make it over to MayorsManor… 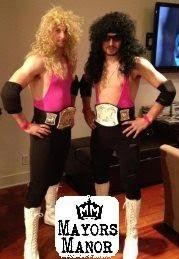 Of course, that’s Lewis and Doughty as the Hart Foundation…and Dustin Penner as a military soldier.  Ironically, he’s now out of the line-up with an injured hand.