You are here: Home / NHL / Canucks / Courtney Force – she knows all about fast moving sports 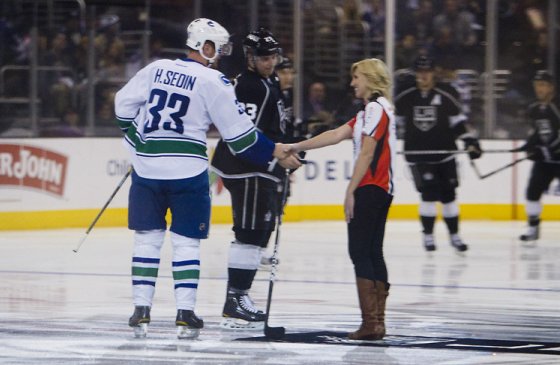 If only everybody could just show up for their first hockey game, walk onto the ice following the National Anthem and drop the puck to start things off.

Life doesn’t work that way for the average person.

Yet, Courtney Force was lucky to have that experience last night.

And although she’s a native of Yorba Linda, she says she’s not a Ducks fan.

“My brother-in-law is the biggest hockey fan, he’s from Chicago and he plays all the time. I think this is going to be my new thing though. I’ve been watching it on TV and being around him and my sister, who are always watching it, I’m very intrigued by it.”

Just prior to the ceremonial faceoff between the Kings and Canucks, we spent some time together, talking about where she’s been and where she’s headed. Sure, she’s attractive, with her California blond hair and great smile. But, she’s also charming far beyond her 23-years.

Even casual sports fans have probably heard of her father, John Force. He’s one of the best drag racers of all-time. While it was Don ‘the Snake’ Prudhomme in the 70s and Kenny Bernstein in the 80s, it’s been a sport largely dominated by Force for nearly two decades now, as he rewrote the record books and won 15 NHRA Championships.

As his career is slowly winding towards the finish line (at some point in the coming years), daughter Courtney’s is about to begin. She’s been testing in a funny car this season and is expected to debut next year. When, exactly, isn’t clear though.

“We haven’t confirmed anything yet. I really wish I knew, so I could tell everyone because I’d love to know. Pomona would obviously be an amazing race to be racing at,” she said, referring to the Winternationals in February. “Depending on sponsors and how things go, there’s nothing confirmed that I’m racing full-time next season or not. I’m hoping that I will be though, we’ll see.”

Another factor at play is the future of her sister, Ashley, who was a driver in her father’s fleet of funny cars until she took this season off to start a family.

“It’s only a four car team and I don’t want to step on any toes or move anyone out of the way,” Courtney shared. “Ashley just had her baby, so her time is being consumed with that right now. I don’t think she’s made a final decision about if she’s coming back next season or not. And then there’s always Mike Neff, who’s doing an amazing job and hopefully clinching the championship this weekend. So, we’re just kind of leaving it up in the air and I think dad will probably tell me the day before Pomona when everything is all figured out.”

While it’s dad John that will be heavily involved in her new profession, it was mom Lauri who handled the bulk of raising her and sisters.

“It’s been my passion since I was a little kid though. I grew up watching my dad drag race and drawing pictures of race cars. I knew this is what I wanted to do and it was my dream. I’m finally getting that opportunity.”

What about the worst advice she ever gave you, I asked Courtney?

“Listen to my dad, maybe,” she said and then started laughing.

That answer wasn’t too surprising though. The Force family members were part of a reality TV show a few years ago and John’s incredible success at the track didn’t always translate well to his home life.

“He’s a little crazy sometimes,” Courtney admitted. “But, he knows that sport better than anybody. So, I definitely have to listen to what he has to say.”

Does she crave his input away from the track too?

“Dad always tries to give me dating advice, which I’ve never understood,” said Courtney. “He still treats me like his little girl.”

She went on to say he even goes so far as to try and implement curfews – something Courtney says “is a little confusing,” especially considering her age.

As for any comparisons to her big sister, Courtney acknowledges it and welcomes it.

“She definitely has given me some big shoes to fill,” said Courtney. “I’ve said (to her) ‘Geez, you’re making it tough on me to go into this sport.’ I already had my dad’s shoes to fill and now I have hers, as well.”

Courtney is also among the many fans pulling for Ashley to return next season.

“I love my sister and I think it would be fun to have her out there. Competing with her and my dad would just be a dream. It would make things a lot more interesting when we’re back home and go out to dinner as a family.”

Wait, they don’t get enough of dear ol’ dad at work?

“We just had a big family dinner the other night and it was a mess,” Courtney revealed.

They’ve come up with a plan to calm the always hyper John though.

“He quiets down when we let him hold Jacob (Ashley’s newborn). That’s the key,” Courtney claimed.

It seems like Ashley is always one step ahead too – she beat the younger Courtney to college at Cal State Fullerton, being a race car driver, getting married and having a kid. So, what accomplishment, if any, does Courtney think she can be the first to reach?

“Hopefully, maybe a championship one day. I think that’s the only thing I have to beat her at right now.”

First steps first though. How would Courtney script her perfect debut next season?

“The most important thing is I really would like to get qualified,” she said. “I don’t think I can look past that. If I happened to win a round or go a couple rounds, I couldn’t ask for anything more. I really want to make the show!”

Still in her early 20s, she’s just about made it.

When she does, there will be plenty of attention given to her, especially because she’s good looking. However, like any female athlete in a male dominated sport, she’ll need something more to have any sort of staying power.

That won’t be a problem for this future funny car pilot. She was a real pleasure to talk with and her excitement, yet well-grounded outlook, should serve her well.

Courtney is one to watch.

Here’s some bonus audio, where she talks about her favorite race track, driving a funny car compared to a dragster, reality TV shows and more. NOTE: this is raw, unedited footage, simply spliced together from various points in our conversation.