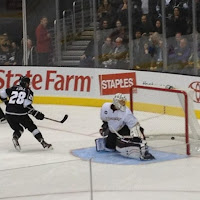 Although the Kings put up 17 shots in the first period – a season high – and outshot the Ducks 37-24, it still took a shootout to decide tonight’s game.

After the Kings 2-1 win, thanks to shootuout goals from Jarret Stoll and Justin Williams, here’s what coach Terry Murray had to say…

– On Justin Williams scoring in the shootout after his late-game penalty gave the Ducks a power play: “I acknowledged that in the dressing room post-game. It was a huge goal for him to get us the two points. It’s unfortunate with the penalty, he’s just doing the things he has to do to recover some pucks on the fore-check as fast as possible. I think he was just a little off-balanced and the stick just happened to come down…He bounced back. He scored a huge goal for us to get the two points.”

– On the play of the two Russian call-ups, Andrei Loktionov and Slava Voynov: “I thought both were very good. Loktionov was on Richards’ line and they played against the top lines on Anaheim here tonight. I was very confident with his play without the puck. Both guys [Loktionov and Voynov] are very skilled with the puck. They’ve got a lot of composure. They see the ice. They make some plays…They’re both going to be very good players.”

In the plans:  LA Kings vs Anaheim Ducks outdoor game

Dustin Penner on the Penner Cup – Kings vs. Ducks, March 2011