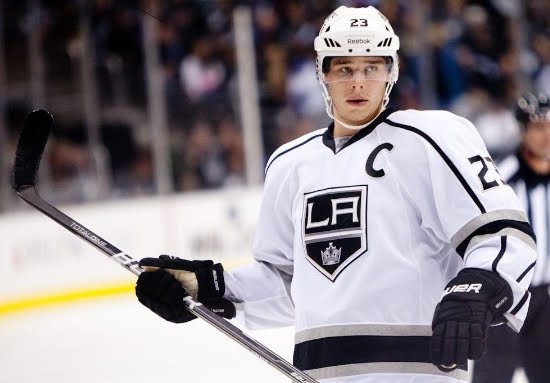 Our new ‘What I’ve learned…’ series has already brought forth a myriad of mixed information.

Drew Doughty shared who was ‘one of the best passers I’ve seen’ (and it wasn’t Anze Kopitar), Kevin Westgarth may be man crushing on one of the new Kings forwards, Trent Hunter spoke about being mesmerized by somebody who can do amazing things with the puck, and Ethan Moreau let the world know which one of his teammates has been talking his ear off on the bus.

However, it was a comment by Westgarth – where he called captain Dustin Brown a nerd – that serves as the backdrop for today’s article.

First though, here are some things Brown says he’s learned over the first month of the season…

About Simon Gagne – “I learned that he and Joe Bernier are really good friends.”

About Jack Johnson – “I think he got a new car. I don’t really know. Some red car I think I’ve seen him driving around in.”

About Justin Williams – “With Stick, you get to know him pretty well. So, there’s nothing really new to learn about him.”

About Moreau – “I’ve played against him and known him off the ice for quite some time. But, one thing, and not in any specific way, it’s been fun to be around him off the ice. He’s a pretty funny guy.”

About Jonathan Quick – “Other than he’s the new record holder, not much – that’s about it with him.”

About Rob Scuderi – “I can’t give you anything on him. I carpool with him and live right next to him. So, we know each other too well.”

In response to Westgarth calling him a nerd – “I’d say I’m more of a geek. He’s more of a nerd. He corrects you on your pronunciations all the time and proper grammar. It’s a whole Princeton thing, I guess. So, I think he’s more of a nerd. I might be a geek, but he’s a nerd, that’s for sure!”

Brown went on to confirm at least part of what Westgarth had said though when asked if he had learned anything new about Alec Martinez recently – “He’s a geek. He and I have computer talk all the time. So, he’s a geek like me.”

To read the other ‘What I’ve learned so far…’ articles, see the links below. Still to come later this week – Gagne, Richards, Matt Greene and more.  Just wait till you see what they’ve learned.

What I’ve learned so far… by Drew Doughty

What I’ve learned so far… by Kevin Westgarth

What I’ve learned so far… by Trent Hunter

Dustin Brown adds a new name into the Penner vs. Greene feud

the photo above appears courtesy of Michael Zampelli