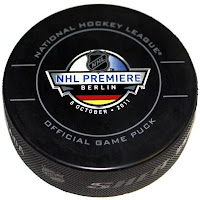 Good morning. It’s time to grab some coffee and enjoy some hockey, all the way from Berlin, Germany. Here’s your pre-game primer – featuring notes and quotes from several members of the Kings, as they prepare to face the Buffalo Sabres for the only time this season. Details for today’s ‘first goal contest’ are also listed at the end of this article.

– Two line-up changes from yesterday, as coach Terry Murray will go with Jonathan Bernier in net (as expected). On November 19th last season, Bernier faced the Sabres in Buffalo and gave up four goals on 36 shots. The Kings lost that game 4-2.

– Murray’s other change is replacing Trent Hunter with Kevin Westgarth among the forwards. This pushes Ethan Moreau up to the third line with Scott Parse and Jarret Stoll, while Westgarth will fill the right wing spot on the fourth line with Kyle Clifford and Trevor Lewis.

– Parse Watch Continues: Due to Dustin Penner’s ‘lower body’ injury (believed to be a sore groin), Parse remains at left wing on the third line. In the season opener on Friday, Parse had 16 shifts for 10:59 of total ice time. He also took two shots on goal and had zero points.

– Morning Math with Jack: After one game, Jack Johnson has an even plus-minus rating. He was on the ice for the final three goals of the game – when Marian Gaborik scored (to put the Rangers up 2-1), when Mike Richards tied it late in the third period and – obviously – when he scored the game winning goal in overtime.

– Anze Kopitar on facing the Sabres – “Obviously, they’ve added a few guys to their line-up. So, it’s going to be a fun game. Like with the Rangers, we’ll want to get off to a good start and keep it rolling.”

– Willie Mitchell on facing the Sabres – “Good goaltender – that’s the first thing I think of with the Buffalo Sabres. (Ryan Miller) is a great goaltender, that’s what comes to mind for me. We don’t see them a lot. But, they’ve a team we’re going to need to get a lot of shots on net to beat them.”

– Drew Doughty on the Sabres – “They stacked up a little bit in the offseason (with their roster additions). They have a good young team and a great goalie there. It’s going to be a challenge for us, especially on back-to-back nights.”

– Rob Scuderi on the Sabres – “There’s a new look for them, kind of a different feel for the team. Yet, they’re still built with a great goaltender and solid defense.”

– Simon Gagne on the Rangers – “It should be the opposite of the Rangers. They have really skilled forwards, a lot of speed. They’re OK winning the game 6-5 if they want to. That’s maybe not the type of hockey we want to play against them. But, they’re really good offensively and really dangerous on the power play. We’re going to have to be really disciplined against them. And they have Ryan Miller in net, who I think has been maybe the best in the league the last couple of years. So, for us, the challenge is there playing one of the best goalies in the league.”

– Sabrer-sational: Just how good is goalie Ryan Miller? In his last four starts vs. LA, Miller is 3-0-1 with a 1.47 goals-against average and one shutout.

– Sabres ice-time: Buffalo’s two newly-acquired defensemen, Robyn Regehr and Christian Ehrhoff, were on the ice for a team-high 30 shifts in Friday’s game vs. the Ducks.

– Today’s game will be televised on Fox Sports West. You can also listen to it for free via the online radio broadcast. Simply click the ‘listen live’ link here.

– CONTEST: One random winner will get a free t-shirt from our sponsor, Ref You Suck. To enter, simply guess which player will score first for the LA Kings. Post your guess in the comments section down below.

POLL:  Where will the Kings finish in the standings this season?