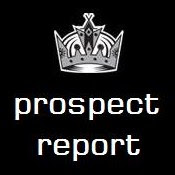 This weekend looked to be a rough one for the Manchester Monarchs – the Kings top farm team. Their schedule saw them playing three road games, Friday, Saturday and Sunday.

Fortunately, they came out of it with a 2-1 record and scored a total of 15 goals. Martin Jones was in net for the two wins, giving up only one goal in each game. He’s looked every bit the part of the goalie many have predicted a big season for – now giving up only five goals total in his four starts (1.26 goals-against average with a .956 save percentage). His only blemish on a 3-1 record was a game he lost 1-0 last weekend.

Jeff Zatkoff, who Jones split time with in goal last season, made his first start of the season in yesterday’s 5-2 loss. He made 22 of 27 saves. It was his first game action of any kind in quite some time, as he accompanied the Kings to Europe as a three goalie.

Here are some additional early season notes on a few other Kings prospects:

Jake Muzzin (ranked second among the Kings top ten prospects heading into the season) – this weekend marked his returned to action after suffering a head/neck injury in training camp…he picked up a pair of goals in the three games played…was credited with seven shots on Goal in yesterday’s game, doubling is season total to 14

Slava Voynov (ranked sixth) – like Muzzin, he made his return to action this weekend with the Monarchs…however, it was short lived…with Doughty injured on Saturday vs. the Flyers, Voynov has been recalled and is expected to start in LA’s home opener tomorrow night…in two AHL games he had one goal, one assist and was a plus-5

Andrei Loktionov (ranked fifth) – scored two goals on Sunday and picked up an assist…also had five shots on goal, which is important as he’s been told to shoot more…his plus-1 rating also ran his season total to plus-7, which leads the AHL…in five games played he has three goals and five assists

Ray Kaunisto (unranked) – everybody’s favorite Yooper has looked good in the early going…in five games he’s picked up a goal, three assists and is plus-3

Jordan Nolan (unranked) – another guy who usually plays more of a tough guy, grit guy role…LA’s seventh round draft pick in 2009 looked much improved in training camp this year over where he was a year ago…so far, he has four assists this season and is plus-6

OHL – two Kings prospects were scheduled to face off head to head yesterday, as the Tyler Toffoli and the Ottawa 67’s played Andy Andreoff and the Oshawa Generals…Toffoli had three points (two goals, one assist) and scored the only goal in the shootout to help the 67’s down the Generals 5-4…Toffoli, the leading goal scorer in junior hockey last year with 57 goals has played seven games so far this season, totaling 14 points (7g, 7a)

Andreoff, who just signed a three-year entry level deal with the Kings, after being drafted in the third round this past June, made his season debut this weekend…there had been speculation he would go to Manchester this year, rather than play his over-age year in the OHL…in the end, the Kings decided to have him play junior hockey this year – and he scored a goal in the defeat to Ottawa…he is considered to be a future power forward and definitely can be labeled as ‘one to watch’ this season.

Michael Schumacher, a late round draft pick this year from Europe – who also impressed coach Terry Murray – has posted some strong numbers in Sault Ste. Marie over his first 10 games in North America (six goals – three on the power play, four assists, 10 points, plus-4, 13 penalty minutes).

2012 Draft watch – Kerby Rychel, son of former Kings tough guy Warren Rychel, has been gaining attention with his play for the Windsor Spitfires, posting 14 points in 12 games (8g, 6a).  He’ll be eligible for the NHL draft next summer.

Looking ahead to next weekend – defenseman Derek Forbort (LA’s first round pick 2010) and the University of North Dakota Fighting Sioux travel to Wisconsin to play the Badgers and Michael Mersh (LA third round pick, 2011).

Later this morning, we’ll have some notes and quotes from this weekend’s action from Ontario, where the Kings’ ECHL affiliate opened their season. It marked the return to coaching for former defenseman and assistant coach Mark Hardy.

Michael Mersch on his experience at Team USA’s evaluation camp

Muzzin at Kings Camp – ‘Hey Jake, what’s with that hair?’ (plus Muzzin vs Toffoli notes)