You are here: Home / comments / LA Kings’ Willie Mitchell on his past, present and future 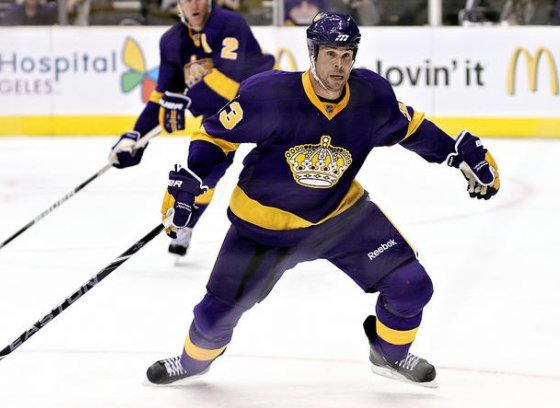 Willie Mitchell will be staring at part of his past when he steps onto the ice tonight in New Jersey.

He debuted for New Jersey on March 25, 2000, nearly four years after they selected him in the eighth round of the 1996 draft.

Nowadays, as he hands out advice to young players, they probably hear stories of the experiences he went though as a prospect coming up through the New Jersey organization.

“I think in life in general, you try and learn your whole way. That’s the journey of life, learning. If you ever think you can stop learning, you’re in trouble,” Mitchell said, as we reflected back on pieces of his career that have molded him into the player he’s become.

“As a pro, I try to learn every day. I tried to learn from guys before me, guys who spent a lot of time in the league. I was fortunate enough to start in one of the best environments ever with the Devils – Scott Stevens, Scott Niedermayer, Larry Robinson, Jacques Lemaire, I could go on and on. There’s a lot of Stanley Cups there. And you don’t win those without having a good model for success. I tried to learn from those guys.”

Some of those lessons have steered him towards being a certain type of player, just don’t necessarily call him a leader.

He says he’s simply tried to be himself since joining the Kings – not a “rah-rah guy who tried to be overbearing at times.” Instead, he’s offered to be someone who guys can talk to, someone who’s there to listen and help offer suggestions on how to navigate through difficult situations.

“A lot of times in this league, we think we’re a lot better than what we are and when we’re not playing well, we think we’re a lot worse than what we are,” he said. “That can be tricky. And I don’t think that experience happens overnight, you don’t learn that right away. That’s how I try to help out. So be it if people think that’s a voice or a leadership role. You don’t strive to be somebody like that. If it comes to you, then that’s flattering.”

He entered this season at the mid-point of his present situation, having signed a two-year deal with the Kings back in the summer of 2010. Still, he thinks the two halves in Los Angeles will be different, with the most difficult part behind him.

“There’s no doubt I was a player who had some risks (attached) to me coming in,” the 34-year old defenseman said. “Although I had a wrist and a knee injury last season, with the head, everything was good.”

This summer was different for him too, both on and off the ice. Last year, he wasn’t able to partake in most of the extracurricular activities he enjoys in his free time, nor was he able to work out much. This summer, not only was he able to do more, Mitchell says he probably hasn’t trained this hard in over decade.

“Outside of maybe when I was 22 or 23 years old, when you’re young and full of energy and the NHL is upon you and you’re just working out like a madman – and sometimes working out without a purpose, you’re working out so hard – this was probably the hardest summer of training I’ve had in a long time,” he admitted.

“The other part that’s just as important, I think, was that I did a lot of things I wanted to do. When you have a concussion, you can’t just go out fly fishing or go out on your boat and relax because the sun bothers you and all those things. Having a chance to get all of that out of your system makes you that much more excited for the season to start.”

That’s lead him to feel pretty confident of late – with one caveat, “Not that I’m going to run up and down the ice like a Drew Doughty. But, I’m going to have a much more consistent, better season.”

He’s not only happy about the work he put in this summer, he’s more than pleased with the changes GM Dean Lombardi made to the Kings roster.

“The organization made some great moves. Being a veteran player, that’s a place you want to be in. What goes a long way to players is when the ownership group and management goes out and brings in players like they did this year. To us, it says they believe in this group. And when you have your ownership, your management and your coaches believing in you, that says a lot. That gives you a big boost of confidence.”

He went on to say, “I absolutely enjoy it here.”

Which brings us to the future.

It’s understandable if Lombardi doesn’t want to talk contracts with any defensemen for a few months. But, if the Kings approached him at some point about signing an extension, is that something he’d be interested in?

“That stuff takes care of itself whenever it does,” he said.

Well, that’s not a very Willie Mitchell answer. All last year he was brutally honest – and insightful – when answering questions. And now he’s going to pull up easy, with a cliche?

“No, I’m dead serious with that answer,” he said when pressed harder. “I think no better experience than that for me was having my concussion and going into free agency (in 2010). I was in a similar situation than I am here. I was having an excellent season (in Vancouver) and if I got through that season, whether it’s term or dollar figures, it might have been a little bit different.

“As a player, all you can do is control the things you can control. For me, that’s going out and being the best teammate I can be for my teammates and being the best player I can be for the LA Kings. That’s what I’m going to try and do this year. If I do that, that’s going to work out quite nicely for the Kings and myself. I’ve done enough contracts after 12 years in the league. You come to know those things always work out how they’re supposed to.”

There’s a long season ahead, size things up for the team.

“I’m really excited about this year and what’s ahead of us. I don’t want to get too far down the road. But, I think the number one thing for us is to win our division. I think we have a really good shot at doing that. Then, if we win our division, we get to where we want to be and that’s in the playoffs. That’s our first step and that’s our only focus right now. Once we get there, our next step is, obviously, the big prize. To have a shot at being one of 16 teams in the tournament is what it’s all about it.”

Willie Mitchell on his bro-mance with Mike Richards

Mitchell not sure what went wrong with the Kings

the photo above appears courtesy of Ikiri Photography