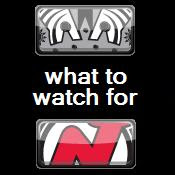 Tonight’s game between the Los Angeles Kings and new Jersey Devils will feature a pair of homecomings and a season debut.

The two clubs last met on October 30, 2010 in LA and the Kings were victorious 3-1, led by goals from Justin Williams and Jarret Stoll.

– The four-minute man returns: Cam Janssen was originally drafted by the Devils in 2002. However, he spent the last three-plus seasons with his hometown St. Louis Blues. This summer, he signed a free agent contract to return to New Jersey. Tonight he’ll make his season debut. In his MayorsManor interview last season he talked about scouting Kyle Clifford prior to playing the Kings. So, what’s in store there?

– Power play: New Jersey has converted on just 10% of their chances with the man advantage this season (one goal in 10 tries). Granted, they’ve only played two games. However, that’s not too far off their 14% conversion rate last year, which was third worst in the league.

– Harrold Watch 2011: If you circled this game on your calendar in the hopes of seeing former Kings defenseman Peter Harrold, you’ll probably be sad to hear he won’t be in the line-up. Or even in the building for that matter. He’s now in Albany, with the Devils AHL farm team.

– The return of Dustin Penner: After spending the entire summer enduring intense workouts (and dropping quite a bit of weight) to get ready for the new year, Penner developed a lower body injury at the end of training camp (believed to be a sore groin) that forced him to sit out the first two games. Tonight, he’ll play on the second line, with Mike Richards and Dustin Brown.

– Homecoming, part II: Like Janssen above, defenseman Willie Mitchell will be going through his own homecoming of sorts tonight. Originally drafted by New Jersey in 2000, he talked about what he learned as a Devils prospect in a MayorsManor interview posted earlier today (link).

– East Coast Bias: Simon Gagne will be up on the top line with Anze Kopitar and Williams. In 53 career games vs. the Devils, he’s totalled 31 points (21 goals, 10 assists). Richards has hadn’t quite the same luck, mustering only seven goals in 40 games vs. the Devils.

Willie Mitchell admits to developing a bro-mance with Mike Richards