You are here: Home / hockey / LA Kings at Colorado Avalanche – what to watch for 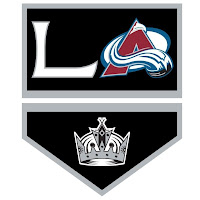 Today’s will be just the second back-to-back series of the season for LA…and, unfortunately, they’ll be doing it at high altitude.

On the plus side, the Kings have dominated the Avs of late – winning eight of the last nine games, including five straight and the last three in Denver.

Colorado’s home record is also one of the key story lines, as their 6-4 record this season features six wins on the road (tops in the NHL) and not a single win at home in four tries.

Here are some other things to watch for…

– Left Wing Stats: Who would have ever thought that after 10 games, Scott Parse would have more goals than Dustin Penner?

– Richie, not Ricky: Brad Richardson, a former Avs draft pick (2003, fifth round), loves to play against his old team.  Last season, he had a hat trick in Denver and has seven points in nine games lifetime vs. Colorado. Don’t be surprised to see him spend a little time on the top line with Anze Kopitar.

– Quick again: A few days ago, Kings coach Terry Murray spoke here about the possibility of starting Jonathan Quick in back-to-back games this weekend. Sure enough, that’s what he’s doing. Quick, who still hasn’t lost a game in regulation this season, will square off against Semyon Varlamov at the other end of the ice. Besides his awesome stats this season, Quick holds a 7-0-0 record and two shutouts against the Avalanche, winning three of four starts in Denver (he was pulled in another game). Varlamov has only faced the Kings once ever, a 4-0 loss last season, when he was with Washington.

– Quickness of another sort: Speed, speed and more speed. The Avs are one fast team. Paul Stastny (once rumored to be coming to LA in a trade for Jonathan Bernier) will center the second line. Matt Duchene will center the third line. Up front, on the left side, the Avs will feature Gabriel Landeskog, the kid taken second overall in last June’s NHL Draft. He’ll be wearing #92 and will probably log about 17 minutes. He comes into the game with six points (two goals, four assists) in 10 games played.

– Not irritating, just annoying: Shane O’Brien signed with the Avs over the summer and he’ll be on D tonight. You may recall some of his antics from the Canucks-Kings playoff series two years ago. Kevin Westgarth certainly remembers (linked here).

Because you demanded it