You are here: Home / comments / Kings at Coyotes – what to watch for w/ Justin Williams 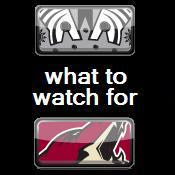 Over the last few seasons, the Phoenix Coyotes have given the Kings fits, largely because of two guys – goalie Ilya Bryzgalov and captain Shane Doan.

With the help of Justin Williams, Jonathan Quick and Dustin Penner here are some things to watch for tonight when the Kings and Coyotes meet up for the first meeting this season…

– Goaltending:  Williams on Bryzgalov now playing in Philadelphia – “That’s a huge loss for them. I always thought he was one of the best goalies in the league. Whenever we played against them, he was always square to the target and he’d never go down unnecessarily and he kept us guessing.”

– More on the goaltending:  Quick on Bryzgalov’s replacement, Mike Smith (who stopped 54 of the 56 shots in his last two games against the Kings, when he was with Tampa Bay) – “Smith is the wild card. But, we have guys here that were in the East last year, like Gags [Simon Gagne], who I’m sure knows him pretty well. So, he’ll be able to help out on that front.”

– Outnumbered attacks: Quick added, “They always have four guys up on the rush, they’re a really good transition team. They have guys like (Keith) Yandle jumping in and they’re good at creating stuff in the offensive zone.”

– Milestone moment for LA: Quick is just one win away from his 100th NHL victory. His lifetime record vs. the Coyotes is 7-8-1, with a 2.88 goals-against average and .896 save percentage (both of which are his worst numbers against any Pacific Division team).

– Milestone moment for Phoenix: Doan has scored 299 goals in the 1124 games he’s played in the NHL. And it’s all but a guarantee he’ll get his 300th tonight, as you can’t talk ‘Kings Killer’ without bringing up his name. He’s posted 65 points against the Kings, more than any other team he’s played. Doan is a warrior and is what every NHL forward should strive to be. He was also ahead of the curve on the now-popular ‘Kopitar is underrated’ bandwagon.

– Special Teams:  Penner scored his first NHL goal against the Coyotes on November 30, 2005 and he’ll be looking to find the back of the net tonight for the first time this season, perhaps on the power play – “We need to be good on special teams. I think you win the majority of your games if you win the special teams battles. We’ve been really good on the penalty kill, and we’re clicking at 25% on the power play right now.”

– Alec Martinez: The 23-year old defenseman made his NHL debut vs. the Coyotes last October. After a promising first year, he’s gotten off to a bit of slow start and was even scratched from the game in Philadelphia last Saturday. With rookie Slava Voynov looking to make his mark, after debuting Tuesday vs. the Blues, can Martinez get back to where he was just a few months ago?

– Kevin Westgarth vs. Paul Bissonnette: When each team has a heavyweight in their line-up, fireworks are possible at any moment. Both guys politely shared some opinions about each other on MayorsManor last year. And earlier today, Westgarth spoke about his desire to get that first scrap of the season out of the way soon, possibly with Biz Nasty.