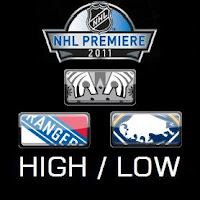 For those unfamiliar with the High/Low segment here on MayorsManor, it’s a pretty simple format where we look at three highs and three lows from a specified topic – for example, a game or somebody’s career. Here, we’ll be reviewing the Kings’ trip to Europe, where they played the first two games of the season…

– Anze Kopitar: He scored the first goal of the season on Friday and added two more on Saturday. For anybody questioning how last season’s injury may slow him down to start the season, the answer has been given. He flew back to the U.S. with four points (three goals, one assist) and lead the forwards in minutes played both nights.

– Moreau: Singed in late August to bring some veteran leadership and extra grit to the third and fourth lines, Moreau delivered in both games. He had the second most hits on the team in the season opener, with four (only training Matt Greene’s five hits). and was tied for the team lead in the same category on Saturday.

– The power play:  Last season the Kings finished with a dismal conversion of rate of 16.1% when playing with the man advantage. After two games this year, they’re up to 25% on the young season.

Honorable mentions: Jack Johnson (scored the game winner in OT on Friday and assisted on one of Kopitar’s goals on Saturday) and Mike Richards (picked up two points – a goal and an assist – and was perhaps the best player on the ice Saturday).

– Jonathan Bernier: One game doesn’t make a season and the sky isn’t falling. However, during training camp coach Terry Murray had said he would play the hot hand this year instead of following a penciled in plan like last year. Thus, the opportunity was there for Bernier to stand on his head and show Murray and the rest of Kings’ management that he plans on pushing Quick for the starting job. Four goals later, he’s not off to the best of starts.

– Faceoffs: With Jarret Stoll and Michal Handzus at the faceoff dots last year the Kings consistently put up solid numbers (51.1% for the season, 10th best in the NHL). On Friday night though, the Kings were crushed by the Rangers in this area and things were only slightly better on Saturday vs the Sabres (i.e. Richards only won four-of-ten against Buffalo).  Thus, after two games, LA’s team winning percentage sits at just 47.9%.

– Trent Hunter: After Scott Parse was the focal point during nearly the entire exhibition season, Hunter was already in Murray’s dog house after just one game. Like Bernier’s comment up above, the sky isn’t falling, nor is the world ending. However, in order to receive playing time in the months to come, a better effort will clearly be needed.

Honorable mention: Dustin Brown – he recorded zero hits on Saturday vs. the Sabres. For a guy who is normally near the top of the league in hits – and in a game the Kings were losing from nearly the drop of the first puck – he needs to be more involved physically if the Kings are going to have a chance to win most nights.