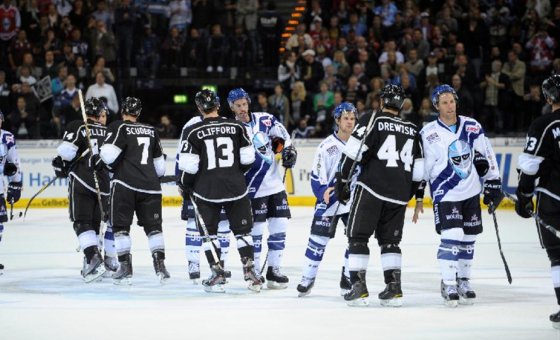 The pre-season is now officially over for the Los Angeles Kings after they defeated the Hamburg Freezers 5-4 earlier today in Germany.

– The Kings were allowed to play the game under German Elite League rules, thus they had 20 skaters, plus two goalies. The line combinations and D-pairings were:

– The Kings goaltending duties were split between Jonathan Quick and Jonathan Bernier.

– Kopitar led the offense, as he has all pre-season. He finished the game with three points (one goal, two assists). Williams (one goal, one assist) and Scuderi (two assists) each had two points in the game.

– Serge Aubin (who played with former Kings defenseman Rob Blake in Colorado during the 2002-03 NHL season) had two goals for the Freezers, while Brandon Brooks had one goal and added an assist.

– The three stars of the game were: 1) Cristoph Schubert 2) Aubin 3) Kopitar [no explanation for how/why Schubert received the first star]

– After the game, Doughty – who was playing his first game of the new NHL season – had this to say: “I’m ready to go. I can’t wait for the start of the season. That is the game we all look forward to since the start of the summer. It wasn’t too difficult for me to get in the flow. I worked hard in practice and during the summer to be ready for this.”

Tomorrow, we’ll take a look at the Kings overall performance in their eight pre-season games.

above photo courtesy of Hamburg Freezers