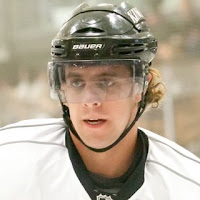 Over his five pro seasons in the NHL, center Anze Kopitar has averaged 26 goals and 44 assists. Yet, he’d have to be near the top of any ‘underrated player’ list.

Few outside Los Angeles – or maybe the Pacific Division – are aware of just how good he truly is. Last year he became even better too, posting a plus-25 and getting some early talk as a Selke nominee before suffering a late-season injury.

He’s also one of those rare players who is good all the time. A few friends could ask him to play a pick up game late one night and he’d still dazzle and amaze at both ends of the ice. Mailing-it-in must not translate to his native language.

You can argue that pre-season stats are meaningless, just don’t tell Kopitar those games don’t mean anything. If he’s on the ice with a stick in his hand, he wants to score or be involved in a scoring play.

Two seasons ago, he posted five goals and three assists during the NHL exhibition season – earning the inaugural Eddie Joyal Award (given to the player who leads the Kings in pre-season points, honoring a member of the organization’s first squad back in 1967 – more on that in a moment).

Borrowing a phrase that Kings fans hope they’ll hear often about Kopitar in the months to come, he was back with a vengeance this pre-season.

Showing no signs of the leg injury that forced him to miss the final weeks of last year’s regular season and all of the playoffs, Kopitar – who says he trained harder than ever this summer – appears more than ready to start the new season tomorrow.

With five goals and four assists (nine points) he once again led the Kings this pre-season and earned the third annual Eddie Joyal Award.

Will his success over the last few weeks translate into a monster season? That’s the prevailing thought. And if Dustin Penner, who was also committed to extensive summer conditioning, plays like the guy GM Dean Lombardi wanted when they acquired him – look out. This could be the year Kopitar challenges for the NHL scoring title.

Back to Joyal for a minute though, because history is important.

For those unfamiliar with many of the names who filled the roster for Jack Kent Cooke‘s first Los Angeles Kings team, Joyal was one of the early stars.

He had previously played for two other NHL teams, but never landed a full-time role.  Finally given his opportunity in LA, Joyal led the Kings in points during their first two years in the league.  In ’67-68 he had  23 goals and 24 assists.  And in year two, he posted 33 goals and 52 points – both team highs.

He also assisted on the Kings first goal, scored by Brian Kilrea in October 1967.

The Eddie Joyal Award was established by MayorsManor.com as a way of paying tribute to one of the key players who paved the way in the early days of the LA Kings franchise.

For more information on the Kings early years, including interviews with several players, be sure to check out the links below.

NHL History – a look at the Kings and the ‘Second Six’