You are here: Home / NHL / Blue Jackets / Moreau’s highs and lows from Edmonton and Columbus 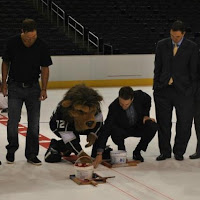 A few days ago Ethan Moreau got his first taste of being inside Staples Center as a member of the Kings. It between observing the work being done to the ice and taking photos with other guests, he shared several thoughts about signing his recent deal with Los Angeles.

First off, even though it’s a one-year contract, he doesn’t see this as his last year in the NHL. Sure, he’s already played 900 games over 15 seasons in the league. However, he says he’s finally healed up and ready for more – much more.

Yet, that’s the road ahead. And before moving on to training camp with the Kings in a few weeks, he reflected back on the travels that have brought him to this stage of his career.

“Going to the Finals was probably the high and the low point,” he said, when speaking of his time playing in Edmonton. “We were one game away from winning a Stanley Cup. Then, losing was probably the low point because you come so close to realizing a dream that doesn’t happen – you’re left with a very, very empty feeling – which is motivation to get back there with this team and to win it. That’s the only thing that will kind of make that feeling go away.”

Things were different in Columbus, where he was limited to just 37 games last year due to injuries.

“It was exciting to start last season there. I had a lot of responsibility and I played a lot early in the season. Unfortunately, I broke my hand and had to have surgery, which really derailed my year. Like you said, I only played 37 games, so it was tough to get a great feeling for the organization or the city. But, I enjoyed my time there, even though it was short.”

Although Moreau and fellow LA roster addition Mike Richards are very different players, one thing they have in common is knowing what it’s like to play in a hockey-crazed market.

Richards has already acknowledged he thinks he’ll like it better in LA, where he can focus more on the game and less on answering questions away from the rink.

Moreau already had a taste of a ‘less intense’ market when he was the Blue Jackets last year. Did he find it any easier?

“As a player, when you come to the rink, this is your place of work and you’re going to prepare the same way, regardless of what city you’re in,” Moreau explained. “When I was in the environment of Edmonton, you couldn’t really get away from it. Your privacy is next to nothing – you can’t really live a normal life without talking about hockey ten times a day. If you want to go to your kids’ school or the grocery store or a restaurant, you’re constantly talking about the team. Which is OK. But, after a while, it does wear on you. So, I think the difference in a less-than-traditional hockey market is you don’t have as many conversations about hockey. That’s probably the best way to put it.”

Although nobody would ever mistake Los Angeles for Edmonton, Moreau still sees similarities in the overall approach – “Your focus is still the same. There’s still a passionate fan base here and an organization that really wants to win, as do the players.”

To see a 90-second time lapse video of the ice coming to life at Staples Center this week – featuring the entire start to finish process – click here.

Or…for more with Moreau, including him explaining why he’d rather be playing with the Kings than against them this season, click here.