You are here: Home / comments / Kyle Clifford raising his own questions during Kings Camp 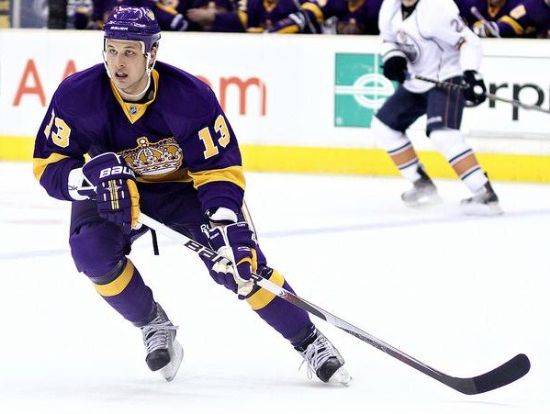 Last weekend, Kyle Clifford intimated that he wasn’t letting himself believe he had earned on spot on this year’s LA Kings team.

Given his humble and quiet nature, it wasn’t surprising that the 20-year old forward was approaching training camp with anything other than his full passion for the game.

One thing that has changed for him in his second year though are the people around him in the locker room. Most notably, there’s somebody missing from the stall next to him.

Did it take coming to camp and not seeing Wayne Simmonds sitting there for the full realization of the trade to hit home?

“Yeah, it’s different,” Clifford said. “Wayne was such a character guy and a great guy who helped me out a lot last year. He kind of took me under his wing. So, he’s going to be missed.”

Perhaps one of the things Simmonds cautioned him about was the tendency some players have to go through a ‘sophomore slump’ their second season.

“You don’t want to take a step backward,” explained Clifford. “My main goal is to always be moving forward. I take each day one day at a time though. If I do that and listen to the coaches and the veteran leadership in here, I’ll keep improving my game. But, I haven’t set any goals for number of points or anything like that. Well, win all my fights – but, that’s a given every year!”

Another given for Clifford this year will be his equipment. Over the summer, he signed an endorsement deal with Bauer.

“I grew up using Bauer most of my life. So, sticking with one equipment person just makes things a little easier.” As he put it, “I’m wearing everything Bauer, head to toe Bauer.”

“It’s still camp. So, it’s still tough and it’s still grueling,” said Clifford. “After coming in and playing last year, now I know what to expect though. With the team we have now it just makes this year that much more exciting too.”

With that excitement, some of the other Kings have also been talking about an increase in pressure the last few days as well.

“I guess you could say that,” remarked Clifford. “But, pressure is a good thing. I embrace pressure. I think with the type of character team we have here, they will too.”

And the competition for a spot on the third or fourth line?

Cruising the mall with Simmonds and Doughty

Kings coach already juggling the lines for this season