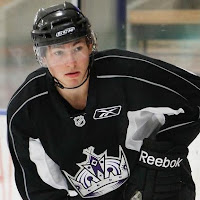 After hearing about it all summer, it’s finally here – the Brandon Kozun vs. Tyler Toffoli showdown.

On the eve of this year’s Kings Rookie Camp getting underway, Kozun returns to MayorsManor once again – this time, he’s talking playoffs, the NHL, baseball and a little more.

“There were some highs and lows during my first year in Manchester, for sure,” Kozun said when reflecting back on his first season in the AHL. “Coming in as a rookie you don’t really know what to expect and there were some bumps along the way. The start of the year was tough because I was doing well and then some guys got sent down and I started to not get as much ice time and really started to have to pay my dues. Another low would probably be losing in the playoffs. We had Bingo (Binghamton) on their heels and we stepped off the gas.”

Flipping the coin though, he also saw the positive in last season – “Some of the highs for me personally were mostly in the second half. I started to get more opportunity and started to produce. I really feel that with last year under my belt, as a pro, I really learned a lot about the pro game and what it takes and I think I’m a better player today because of it.”

Originally drafted by the Kings in 2009 while playing for the Calgary Hitmen, he still spends quite a bit of time back in Alberta.

“This summer was pretty good I had a chance to relax get some golf in and take part in several charity events,” said Kozun. “The most exciting thing was being part of the home run derby in Calgary against Jose Canseco and a couple of NHL players. It was a lot of fun and Canseco is an absolute monster! I can see why that guy hit so many jacks.”

With his baseball days temporarily behind him, he’s turning his attention to hockey once again – always mindful of things the coaches shared with him during previous camps – “Everything they say sticks with you and you try to take in everything to make yourself a better pro,” Kozun said.

You may recall earlier this summer, he went so far as to proudly proclaim he’s “ready for the NHL.” (interview here).

However, he’s also somewhat downplaying the impending ‘battle’ with Toffoli, instead using it as motivation.

“Coming into camp I’m not focusing on beating anyone in particular. I’m going into camp with the mindset to make the team and play to the best of my abilities. Obviously, there will be competition but that only makes you better.”

Although he’s not quite on the Ray Kaunisto level when it comes to chirping people on twitter, Kozun admits to hearing a few good ones on the ice.

“Probably the best chirp I remember was when a guy from another team said to JJ (Justin Johnson), something like ‘How old are you?’ and he responded with ‘Old enough to destroy you!’ – I thought that one was pretty good.”

Speaking of Kaunisto, earlier this week, he was on MayorsManor and offered up his bucket list.

Well, he’s not the only one with a to do list.

Kozun says his plans include “Win a Stanley Cup, travel the world, golf at Augusta, a great white dive and to see every Major League baseball stadium.”

That’s it though. Camp is set.

Kozun has talked the talk. He’s ready, willing and able to be an NHLer.

Will he make the team?

Only time will tell.

LA Kings Rookie Camp Primer – a look at the forwards