You are here: Home / comments / Stoll had questions from Richards, has answers for Murray

It’s been a summer of goodbyes and new relationships for many on the Los Angeles Kings roster.

Earlier today I posted comments from Alec Martinez and Jarret Stoll regarding Wayne Simmonds being shipped off to Philadelphia (link).

On the flip side, the team has been welcoming Mike Richards into the fold. Some, like Drew Doughty, have spent time in a locker room with him already (for Team Canada at the 2010 Olympics). For others, it’s been a whole new experience.

One thing is clear though, every player I’ve spoken with has been just short of giddy at the sheer thought of adding a talent like Richards to the team here in LA.

While some guys have been off on summer vacations or back home in various parts of North America, Stoll is living in the South Bay and had no problems playing the role of host and unofficial tour guide last week for Richards.

He even was at Richards’ press conference – where the highlight may have been something that went largely unnoticed by the overflowing crowd of media at the Kings training facility. While everybody was snapping photos of GM Dean Lombardi officially presenting Richards his jersey, somewhat under his breath, Richards asked Stoll “Was it like this when they got you too?’ – to which Stoll replied, “I didn’t get any of this!”

Prior to that, Stoll had spent a few days with Richards and said the 26-year old former Flyer was “exactly what I thought he’d be – just an easy going guy. He’s very, very easy to talk to and get along with.”

He went on to say, “I had met him a couple times (previously), but I didn’t really know him very well. I’m really good friends with a couple of his buddies in Philly. He’s been asking some good questions and a lot of questions.”

When all was said and done, Stoll surmised, “He looks like a pretty good player mentally. He can score 30 goals and put up 75 points. Defensively, he’s good, too. He’s definitely going to help open up ice for everybody. He has that grit that Brownie (Dustin Brown), physically, has and that’s going to help out, especially come playoff time.”

That’s not the only new teammate Stoll had been getting to know over the last week though. As Richards departed town shortly after the presser, it was on to his next assignment – helping introduce former Oiler Colin Fraser to the lay of the land.

Nearly a decade ago their paths had crossed a few times. It was Stoll’s final year of junior hockey, with the Kootenay Ice (2001-02). Meanwhile, Fraser was a rookie in the WHL, playing for the Red Deer Rebels.

On Friday, they were together on a baseball field of all places. It was ‘Kings Night’ at Dodger Stadium and Fraser was tagging along with Stoll, Dustin Penner, Alec Martinez, Trevor Lewis, Scott Parse and Rich Clune. The fact that Fraser just had surgery two days prior didn’t seem to matter much. He was there to soak it all in.

Stoll is starting to wind up his off-season activities before refocusing on hockey. Recently, he held his annual chatty golf tournament in Canada – where they crossed over the one-million dollar mark.  “It’s for a great cause too, the Children’s Hospital there,” said Stoll proudly.  “We had good guys there, doing good things for the community and supporting my charity.’

Now, with training camp just over a month away, he’ll need to adjust to a new role. Richards will be taking over as the second line center, moving Stoll down to the 3C slot.

Is he a little disappointed to be changing lines? “No, I’d be very, very selfish to say that,” shared Stoll. “I consider myself a guy who will play any role, any situation in order for us to win and to be a good teammate. I think we need that depth up the middle to win and we have it between the pipes and on defense. I think we just needed it down the middle a little more. Adding him just brings us that instantly. So, I’m happy to play anywhere, as long as we win, have fun and get into the playoffs.”

Given all the centers available to coach Terry Murray, how would he feel about being asked to play wing instead? “I feel more comfortable up the middle, obviously, with taking face-offs. Anytime you play the wing, you tend to take less face-offs,” explained Stoll.  “I think as a strength of my game, I feel I’m stronger taking more face-offs. I don’t usually like taking under 10 face-offs a game or ever under 15. I feel I’m better as I take more and more draws.”

Wherever he’s slotted, expect him to understand what’s needed – just like he did at Dodger Stadium on Friday night.

‘You brought your own glove?’ I asked. “It’s not my first time here. I need to be prepared,” explained Stoll. “I was a rookie last time. You need one, especially when you throw the ball around. I’m a lefty, and I don’t think they’re are too many left-handed gloves around here.”

Mike Richards has ideas to help the Kings power play 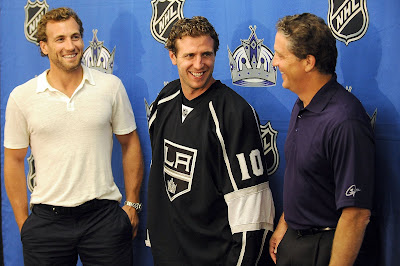