You are here: Home / comments / Robitaille on Rogie and Roenick – Hall of Fame worthy? 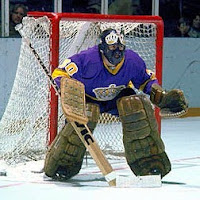 Luc Robitaille was inducted into the Hockey Hall of Fame on November 9, 2009.

That was about as ‘no-brainer’ of a selection as the committee has had in recent years. He finished his career with 668 goals and a Stanley Cup, just to name a few of his accomplishments.

Going back even further in Kings history though, this November will make it 40 years since the Kings added their best goaltender to date, Rogie Vachon.

A few nights after the anniversary of LA sending four players to Montreal for a 5-foot-7 goalie, this year’s Hall of Fame class will be inducted and once again, Vachon will not be there – just like every other year since he was first eligible in 1987.

Why? How has this happened?

Sure, he played in Los Angeles during the ’70s. To say it wasn’t a hockey hotbed is an understatement of epic proportions. However, his stats say he should be in. With 355 wins (including 171 in LA, with a 2.82 goals against average), 51 shutouts, a Vezina trophy, three Stanley Cups and a gold medal at the 1976 Canada Cup (where he had two shutouts in seven games played and a 1.39 GAA)…how has nor received the call?

On the other hand, it’s not that surprising. The first shot on goal the guy ever faced in the NHL was against some forward named Gordie Howe. It’s been an uphill battle ever since!

Recently, I asked Robitaille, now the Kings’ President of Business Operations, if it’s something the team can get behind and help make a push for.

“We’ve tried a couple times in the past,” said Robitaille – referring to before he was in his current position. “That’s one thing I’d like to see (more of), the process of how to get that going. He’s deserving of getting into the Hall of Fame. That’s something we want to do. We tried to push as much as we could last year. But, you can’t influence the voters. It’s one of those things where, as our team gets better and as we get more notoriety, that will give us an opportunity to push it more.”

Next summer’s ballot will also include another familiar face to Kings fans – Jeremy Roenick.

Outside of his one unforgettable year in LA, he had a stellar career – one which will be compared to other first timers on the ballot, like Joe Sakic, Brendan Shanahan and Mats Sundin. Then, there’s also those guys still lingering around from the last few years – like Adam Oates and his 1,079 assists.

I asked Robitaille, is J.R. a first ballot Hall of Famer?

“I think so,” Luc began. “He had 500 goals. He was a difference maker when he played the game and he played big in big games. I would be shocked if he’s not a first ballot Hall of Famer. He’s a Hall of Famer for sure. I would just be shocked if he’s not (included the first time). That being said, there’s so many great players that are not in yet. I still believe, looking at Rogie Vachon’s stats, that he should be in the Hall of Fame. That’s a shame. J.R. had such an impact into our game though. I’d be really, very surprised, if he’s not in on the first ballot.”

If you’re up for some more debate, just wait until the following year.

Robitaille on new jobs for Blake, Gretzky and Laperriere

Word Association with Luc – Robitaille on his teammates, including Kings, Rangers and Red Wings

Interview with Marcel Dionne – we cover it all, from his days in Detroit to thoughts on Kopitar