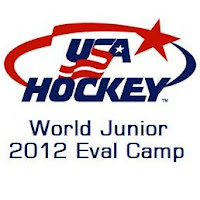 How did this happen?

About the only other marginal credit you could assign to the Kings would be Jack Johnson. An important note though would be that Johnson played for America in the 2006 WJC while a member of the Carolina Hurricanes. Thus, he was pretty much a given for the 2007 team by the time the Kings traded for him, just a little over three months before the tournament began.

And now the Kings – finally – have a big time presence at the Team USA evaluation camp for next winter’s World Junior tournament.

When the roster came out in early June, the Kings were already ahead of the curve – having a pair of defensemen included in Forbort and Kevin Gravel (both 2010 draft picks). Then, a few weeks later, they drafted Nick Shore and Michael Mersch.

That’s right, they have FOUR prospects at this week’s camp. Of course, there’s no guarantee all four will make the team – although Forbort is one of only nine players returning from last year’s bronze medal-winning team, so his game would really have to drop off for him not to return.

Things got underway yesterday at the camp, being held in Lake Placid, New York. The 44 attendees were divided into two groups, team blue (featuring Gravel and Shore) and team white (Forbort and Mersch).

Gravel and Forbort were roommates at last month’s Development Camp in Los Angeles, where Gravel said he also felt a natural pull towards the American players – “You’re always comfortable with the kids you’ve played against or the kids you know a little bit. So, we pretty much grouped together for the week.”

On the ice, Shore and Mersch also found some chemistry at Kings camp. They played on the same line, like they had a few times years before when they were in the U.S. National Program together.

After Shore scored a goal in one of the Kings black/white scrimmages, he was quick to note how easy it was playing with Mersch, saying “I think we were able to feed off each other, I think that helped a lot.”

The two were on opposing teams in the first U.S. scrimmage yesterday, but it didn’t seem to slow down Shore one bit. He was the only Kings prospect to register a goal – tipping in a shot from the point by Jarred Tinordi (son of former NHL defenseman Mark Tinordi), helping his team to a 4-3 victory.

In the second scrimmage, played earlier today, Anaheim native Rocco Grimaldi tipped in a pass from Forbort on the power play to give White a 1-0 lead. They went on to win the game 4-2.

Tomorrow is the pivotal day though. USA Blue will face a team of junior players from Sweden at 10am PST and then at 1:30pm PST USA White will face Finland. The following morning roster cuts will be announced, with the 44 prospects expected to be trimmed down to about 28 players.

After the initial cuts are made, the remaining group will play three games, one against Finland (Thursday) and two against Sweden (Wednesday and next Saturday).

You can watch all of those games for free via a live stream provided by Fast Hockey on facebook.

When camp is over, I’m expecting several of the Kings prospects to stop by and offer full reports. Look for that later this week on MayorsManor.

In the meantime, down below there are links to several previous MM articles on all four of the American-born Kings prospects.