You are here: Home / comments / Mike Richards talks leadership and wearing a letter in LA 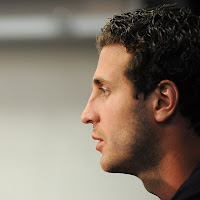 Now, Richards is back to weigh in with some thoughts on the whole subject…

While other guys may have the letters on their jersey, how long will it take you to establish a leadership role in the locker room?

“Leadership is not just one person,” Richards explained. “There’s one guy with the ‘C’ on his jersey and (others) with the ‘A’s, but I’ve always felt that it was a team effort. You can’t have enough experience in a dressing room. Everybody’s been in that position at some point. You don’t make it to the NHL without being some sort of leader. It might be somebody one night, Brownie the next night (or) Kopitar. It’s not always the same person voicing their opinion. If something needs to be said, I’m sure they’ll say it.”

And the role he’ll play in that process? “I just want to come in and focus on hockey. If something needs to be said or if somebody asks me a question, I’ll definitely I’ll answer,” said Richards.

For those who like to look for something that isn’t there, Richards made one thing perfectly clear – he doesn’t have any expectations of wearing the ‘C’ in Los Angeles…this season or anytime in the near future.

“Dustin’s done a great job of captaining this team for a couple of years now,” Richards said with great enthusiasm and conviction. “I’ve talked with a lot of players and I know how hard how he plays – I played against him for (two) years in Kitchener, when he was in Guelph (OHL). I’ve played against him a bunch of times during the regular season and at the Olympics last year. So, I know what type of leader he is and how hard he plays the game. I have no plan on doing anything other than coming in here and playing hockey.”

With or without a letter, does he feel pressure coming to Los Angeles with such a huge spotlight on him being shown on him this summer?

Having been in the Eastern Conference for the past six seasons, who are the LA Kings? In his opinion, what’s the make-up of the nucleus he’ll be joining?

“I’ve heard a lot about how good this group is and how close they are as a group and what the room is like,” he said. “I’m looking forward to being a part of that. They seem like they have a lot of fun. They’re a close-knit group. And I think that’s what you need to have success.”

More specifically, Richards said – “When you have a close-knit group, you would do pretty much anything for them on the ice, as you would off the ice.”

Usually, to be successful in the NHL, teams need a minimum of five high-end players – one goaltender, two centers and two defensemen.

The Kings had four of those pieces in place.

Now, with Richards, the puzzle may be complete.

This group should be ready for plenty of success in the upcoming season.

Jeremy Roenick on Dustin Brown as a captain

Exclusive – Jim Fox on the Kings trade for Mike Richards

Westgarth and Clifford Preparing to Get (Biz) Nasty? – big talk from both sides

Coach Terry Murray already juggling his lines for next season