You are here: Home / comments / Mike Richards – ‘Laperriere guided me in the right direction’ 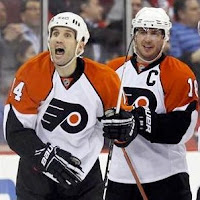 Just over a month has passed since an earthquake-like rumbling was felt around the National Hockey League, as the Philadelphia Flyers traded away two of their most important players.

From the moment he joined the Kings, Mike Richards has been asked a lot of questions about his now former teammate and best friend, Jeff Carter.

Yet, there’s another person from that dressing room who helped play a small part in shaping him into the person he is today…

“Lappy was, I cant put into words, how loyal and honest and hardworking…there’s a lot of words I could use to describe him,” said Richards when reflecting on the impact Ian Laperriere has had on him.

“He was somebody who helped me out and guided me in the right direction sometimes when things were frustrating. When things aren’t going very well he just seems to have that sense of calmness about him, where no matter what’s going on he kinda puts things in perspective. He’s a guy who keeps everybody loose around the dressing room. He and I had a unique relationship and it’s something where I was pretty privileged to play with him for a year.”

Laperriere was on MayorsManor soon after the Kings announced their acquisition of Richards back in June. He described the former Flyers captain as a ‘leadership kind of guy’ and somebody who ‘the bigger the game is, the bigger his game is.’

To read the full interview with Laperriere – where he talks more about Richards, the feud with Chris Pronger, leadership of Dustin Brown and impression of Kyle Clifford – click here.