You are here: Home / AHL / Many frustrations for Ontario Reign President Justin Kemp 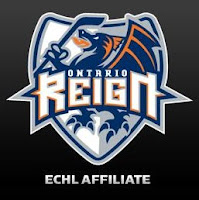 The Ontario Reign, proud affiliate of the Los Angeles Kings (that’s their slogan), have been in the news quite a bit lately.

First, there were grumblings they were looking to create an affiliation with a second NHL team. This wasn’t completely shocking news, as their team President, Justin Kemp, gently voiced his desire to get more support from the Kings in his pre-season interview here on MayorsManor last October.

Like he acknowledged then though, the Kings’ number one priority is winning a Stanley Cup in Los Angeles. Thus, they need to do what’s right for the parent organization first (when it comes to player development). Unfortunately, that may mean they don’t have many prospects available for the ECHL.

The second Reign news item was that coach Karl Taylor had left to become an assistant with Vancouver’s AHL affiliate in Chicago.

Oh by the way, that hiring came out of discussions the Reign were having with the Canucks about becoming that second NHL affiliate.  Sound a little fishy?

Earlier today, I sat down with Kemp again to address the entire situation.

Rather than splice it all up and just use selected quotes for an article, here are some of his raw comments…

– On the idea of adding a second NHL affiliate – “It started at the end of this last season. I went to Karl and asked him, we had struggled to get some help from the LA Kings over our first three years. Missing the playoffs the last two seasons, obviously, we needed some sort of a jolt – something to get the fans excited about. So, we inquired about what other affiliations were out there as a possible secondary affiliate. Vancouver seemed to be the best choice. They were going deep into the playoffs at that time. So, those discussion initially began between Karl and the Canucks. I came into the picture a few weeks later. We thought we’re about a phone call or so away from getting a deal done. Ultimately, what happened is, they pulled back because LA was not in favor of us having a secondary affiliate. I think Vancouver wanted to be respectful of that.”

– On them hiring Taylor: “In the process of dealing with Karl, they really liked his approach and his professionalism. They liked his coaching style and saw a need to fill a hole in Chicago (AHL). We talked about that for a couple weeks and it looked like it might be a possibility. I don’t think we really gave it any consideration until they had him fly up to Vancouver and meet with their general manager. Then, it looked like it was probably going to be a done deal. So, we had indications several weeks prior. But, it didn’t become realistic until about a week before the news broke.”

– More on the Kings not being ‘in favor’ of Ontario adding a second affiliate – “The Kings hockey ops department, in general, had a vision for how they wanted to see their players developed. That’s their prerogative. Those discussions were primarily between Karl and Ron Hextall at that time. I hadn’t really stepped into the picture until the last few weeks, with Karl’s departure. Ron and I have since spoken a few times. My understanding, with him, is that the Kings are going to make every effort to help us out a little bit more – which we really need, just to be competitively balanced with the rest of our league. The Kings have been a tremendous marketing partner to us and we want to see that come full circle on the ice as well.”

– On the Canucks ‘pulling the rug out from under him’ by hiring Taylor during/after discussing an affiliate arrangement: “It is a weird situation. On the surface, yes, one might say that’s the case. The assistant GM we were working with up in Vancouver (Laurence Gilman), I worked with many years ago in Phoenix. So, he and I had a good rapport and I think they run a very, very professional, classy business up there. I don’t think that was the original intent. But, they saw an opportunity to make their team and their affiliate better. I respect that. Karl was very upfront with me throughout the whole process, as he was still under contract here. We gave our blessing to let him talk to them. We’re never going to hold somebody back from an opportunity to progress in their career.”

– On the feeling he’s left with at this point:  “Of course it was frustrating, it was definitely frustrating. A lot of work had been put in to that process, mostly on Karl’s end, to get that affiliation and we thought we very close to it. Ultimately, it didn’t work out. I can honestly tell you, there’s no hard feelings though. It’s not to say that we would never enter discussions again to do something like that. From the perspective of knowing Karl and having a relationship with him, that would have been a great progression (for some of our players) up to the American League. Plus, knowing Laurence Gilman, it was sort of dream come true situation to have that. So, I’m disappointed that I wont have the opportunity to work with those people because I have a lot of respect for them and I liked working with them. But, we’re going to focus our attention now on solidifying and strengthening the relationship with LA. Hopefully, we can have the strongest relationship we’ve had yet.”

– More on why Vancouver would have been a good fit as the second affiliate:  “With Vancouver’s success over the last few seasons, part of what we were trying to create would have made a nice splash with our fan base. To say, ‘Hey we’re partnering with a team that’s had a lot of success…’ – obviously, LA is in a position where they’re really looking like a Cup contender this year. So, I just thought, having those two pieces in place made us that much stronger. I can’t say there was honestly a lot of consideration of any other affiliation. We’re going to close the book on that at this point, for this season.”

– On the possibility of negotiating with other teams next summer: “I think we’ll see how this season goes. If we’re able to get some more players from LA and have a true affiliate relationship…and when I say ‘true affiliate relationship’ I mean on-par with what the rest of our league is doing. [note: he earlier said that the league average is around six players and they’ve only had one per season] So, I don’t see (talking to another NHL team) as a top priority. But, again, if injuries happen and call-ups happen and we don’t have that for a fourth year, I have to look at what’s best for our fan base and our business too. I would say that we would definitely entertain the idea again.”

– On the Reign getting JF Berube (Kings goaltending prospect from the QMJHL) for this upcoming season: “That’s what I’ve been told. Obviously, things can change last minute. But, as it stands right now, that’s our understanding. We’d be happy about that too.  We already feel our goaltending situation is strong. I think that makes it even stronger.”

– On the possibility of other Kings prospects landing in Ontario this season: “LA hasn’t given us any indication regarding who the additional players would be. Yet, they seem to believe we could have as many as three players and some potential two-way contracts as well. It’s definitely looking up from where it’s been the first three seasons.”

– On finding the right mix of players: “With some of those two way relationships, if there are players of ours who they like or we get some additional people sent down, I think we’ll be in good shape. I would definitely hope for more in the neighborhood of four to five (players) this season. I think we’re long overdue. A lot of it has to do with perception also. You never know with an affiliate, it’s sort of a double-edged sword. There’s other teams that have nine or 10 guys on their roster. However, they’re going back and forth all the time. Sometimes their playing with just 12 or 13 guys on their roster. That puts them at a competitive disadvantage. So, depending how you look at it, an affiliation can be a good and a bad thing. Knowing that our AHL affiliate is all the way in Manchester, we don’t have quite as much movement as they have, in say, Reading or Trenton or markets that are just a couple hours drive.”

Now, who does he have on the short list of candidates to replace coach Taylor?

Former Kings assistant coach Mark Hardy is one of them.  Later today, I’ll have detailed comments from Kemp regarding the possibility of Hardy being hired.

I also spoke with Hardy late this afternoon.  So, there is a ton of content coming out on this subject in just a little while.  In the meantime, check out the link below to listen to our podcast with Hardy from a few months ago – great stuff.

Coach Karl Taylor on the Reign’s poor season – ‘It’s all on me!’

Confusion reigning between Kings and their ECHL affiliate?