You are here: Home / comments / Luc Robitaille talks how and why LA Kings changed jerseys 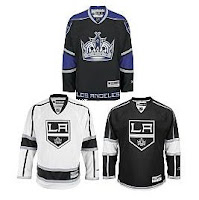 Of course, that’s the obvious answer.

However, if you’re reading this article, you probably want to understand some of the process and thoughts behind the change. So, here goes…

“When we came up with our third jersey a few years ago, we realized our fans seem to really take to it and they really enjoyed it,” Luc began. “For me, as a player, I loved that era (late 80s, early ’90s). We knew we couldn’t quite come back to that. But, we tried to find something that would please everyone – which we could never do. We tried to do something as close as we could though.”

He also recalled their ‘unofficial’ marketing survey – “Before we did the third jersey, once we thought we were close, we asked the players ‘Do you like this?’ They all said they loved it. I always feel that if the players love it, I know the fans are going to love it because we all want to be players.”

So, how about moving from a black third jersey to a adding a white version and making them the primary set for the team…

“Again, we went back to all of our young players. Those are the guys who are going to be wearing it everyday. They’re going to be representing the crown everyday. They all said they want to go black and silver, like the Gretzky-era. That’s a little bit of how we made our decision. Plus, when we looked around the arena, we realized everybody was wearing black and silver. We figured we might as well go with what our fans really love.”

Let me add my two cents here. When you go to a Kings game at Staples Center you see a lot of black and white. However, you don’t see much purple. Thus, it would appear that the majority of fans don’t want to wear purple jerseys, t-shirts, sweatshirts, etc. So, my take is that while fans might like to see it on the jerseys players wear, they themselves don’t seem to wear it much, for some reason. From that standpoint, it does make sense what he’s saying. After all, they are in the business of selling jerseys. If black/white jerseys sell more than purple jerseys, well – that’s a good reason.

Even so, “We don’t want to lose the purple,” Robitaille added. “We’re keeping the jersey we’ve worn the last few years (the black one with a crown) as our third jersey. We’re also bringing back the ‘Legends Nights’ for next season. I loved seeing those (vintage) jerseys. It also gives us an opportunity to bring back some of the players who have been part of our organization throughout our 45 years. So, we’re trying to do a good mix.”

[For what it’s worth, Luc wouldn’t give up who had been selected for those Legends Nights next season.  Other sources tell me it will be Bernie Nicholls, Charlie Simmer and Daryl Evans – playing off the 30th anniversary of the Miracle on Manchester.]

Then, it came back full circle and hit on one of the elements they use in marketing – pride.

“At the end of the day though, to be bluntly honest with you, it came down to the players. What the players wanted, we felt was the thing. You want the players to be proud everyday of what they wear. To me, that goes a long way.”

You know what jersey looks the best though?  The one on the guy holding a Stanley Cup above his head.

When that happens…then the Kings will sell a lot of jerseys – regardless of the color scheme.

More with Luc later today, including his thoughts on Roenick and Rogie in the Hall of Fame, Rob Blake working for the NHL, the Kings going to Europe next season, a possible outdoor game in LA, the recruitment of Brad Richards and much more.

[UPDATE – GREAT NEWS – You can now add facebook comments DIRECTLY on MayorsManor – after reading an article, scroll down to the comments section below – the facebook plug-in is right there for you…COMMENT AWAY, it’s super easy…have fun and please be respectful – no personal attacks, profanity, etc.]