You are here: Home / comments / Luc Robitaille on why the LA Kings are going to Europe 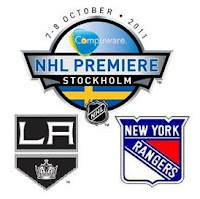 A few weeks ago I joked that it must be contract week, as several Kings prospects and players were busy getting deals inked.

Well, today is ‘address the cynics’ day here at MayorsManor.

This morning I posted comments from Luc Robitaille, Kings President of Business Operations, explaining the how and why behind the team’s jersey changes for next season.

In a summer filled with more positive vibes than any other in recent memory – from the trade for Mike Richards on down – we’d be remiss to at least not address one of the few news item that’s caused a little bit of confusion.

Why are the Kings opening the season in Europe? Some point to the fact AEG owns the arenas. OK, fine. Are there any other reasons and even so, how does management feel about it?

“We were asked by the league. We talked with them and they’re (only) picking so many teams,” Robitaille started out with. “To me, it wasn’t a big deal. I kind of like the experience for the players. Yeah, for sure, you think you want to play your games at home. But, 15 years from now those players can say, ‘Wow, I got to play a game in Berlin.’ I think that’s very special. Those are great memories for the players that they’ll cherish later – like, someday when they retire.”

Fine, that’s years down the road. However, at least one thing on his mind that tied back to the upcoming campaign – “There was certainly something inside of me that (kept coming back to) the last three Stanley Cup winners started in Europe. So, once I heard we had a chance to go to Europe, I said I want to go!”

The Kings will open the NHL regular season with a game vs. the New York Rangers in Stockholm, Sweden on Friday, October 7.  They’ll also play the following night in Berlin, Germany – taking on the Buffalo Sabres.

Once they return to the US, the Kings will play at New Jersey and Philadelphia.  Then, St. Louis will visit Staples Center for the Kings home opener on Tuesday, October 18.

Back to Richards for a quick moment… to see what the Kings new center – and former Flyers captain – had to say about that first game vs. the Rangers, be sure to click the link below.

Luc Robitaille on why the LA Kings changed jerseys

Kings ‘most likely’ opening next season in Europe