You are here: Home / comments / Luc Robitaille on new jobs for Gretzky, Blake and Laperriere 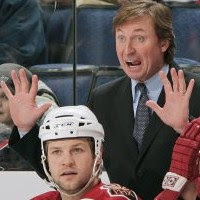 If you were to make a list of the 10 most popular players in Los Angeles Kings history, the names Wayne Gretzky, Rob Blake and Ian Laperriere would definitely be in the mix.

So it’s no surprise that as each of them have transitioned from on-ice roles into new off-ice jobs over the last few years, that their names have been mentioned as possible candidates for management roles within the Kings family.

Here’s Luc Robitaille with some comments…

MM: Wayne Gretzky’s name is being mentioned more and more related to the Kings – including GM Dean Lombardi speaking to him regularly, him being included in the pitch video to Brad Richards, etc. Is there finally some traction on the once talked about role for him in the Kings front office?

LR: One thing people don’t know because we always keep it quiet, is Wayne’s been coming to quite a few of our games. He comes with his family and he really enjoys it. He’s still involved with the situation in Phoenix. So, he can’t really get involved with other teams. We know the Kings are in his heart. He lives in LA. Whenever he wants to see a hockey game, he comes to the LA Kings games. I think there could be something in the future, if it was right for him. To have Wayne Gretzky part of your organization it’s unbelievable. He’s the greatest player to ever play the game. He’s proven too that he can be a really good manager. What he was doing in Phoenix, they were really playing well at the time he finished. People forget that even though Phoenix has been good the last two years, the year before they were almost in the playoffs – all the way until February and then they had a bunch of injuries. He was the coach at the time. It was just a situation where the team went through all that stuff that happened and that’s the reason he’s not with the team anymore. So, he’s certainly an asset that could be really good for us. But, I think, from what I know, he has to make sure everything is (wrapped-up) on his side.

MM: Rob Blake taking a job with the NHL was a surprise to some, being that he was so heavily involved with the NHLPA for many years…

LR: Rob, actually, people may not know, he’s been really involved with our Jr. Kings program. He coaches many kids. He’s at the rink (TSC) like three or four days a week. He’s been very involved. He’s involved in our Alumni Association. He’s still involved in a lot of things that we do. Actually, he and I talked when the job opportunity came from the league. It’s the opportunity of a lifetime – for him to learn, right out of hockey, to go right into management and to be in every big meeting the NHL has. I think it’s a great opportunity for his growth, for his after (playing) career. The fact of the matter is, he lives in LA. He’s going to be in LA. He was a great King. Hopefully one day he decides to be on the hockey side and then he can come and work with us.

MM: Ian Laperriere is still under contract to Philadelphia. However, in a few of his recent MayorsManor interviews he’s talked about how much fun he’s having right now working with some of the younger Flyers. Talk about what it would mean to, someday down the road, possibly have him back in LA, working for the Kings.

LR: Anybody would love to have Ian Laperriere, he’s such a special person and he was one of the heart-and-soul players in this organization for such a long time. Like you said, he’s under contract.  So, there’s not much anyone can do. There’s still the talk that he can always come back and play. So, he’s not done yet. We’ll have to wait and see what happens.

MM: A few weeks ago he told me he refuses to use the ‘retirement’ word just yet…

LR: Exactly – knowing him, he’s going to refuse for 10 years!

Speaking of Laperriere, he was the first person I reached out to when the Kings traded for Mike Richards. Read what he had to say about the Flyers’ former captain, including his feud with Chris Pronger, click here.

Luc Robitaille talks how and why the LA Kings changed jerseys

20 Questions with #20 – in-depth interview with Luc Robitaille, just prior to the HOF