You are here: Home / hockey / Lombardi and Robitaille on Kings pursuit of Brad Richards 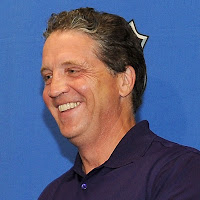 People may not like what he has to say at times, but he pretty much tells it as it is.

Several years ago when some questioned his signing of Dan Cloutier to an extension before he was fully healthy, Lombardi explained that it was a calculated gamble. He looked ahead to the next summer’s free agent goalie market and didn’t like what he saw. So, he tried to lock up Cloutier at a discount. It backfired, sure. But, it’s too easy to evaluate performance after the fact. Go back to the day he did the deal. His logic was correct.

When he once referred to some of his free agent signings as ‘bridge’ players, all but admitting they weren’t that good – or were just good enough – and their primary purpose was to buy time for a few prospects to further develop, it might have sounded harsh. But, it was true.

So, you can imagine the raised eyebrows recently when he referred to the Kings failed attempt to sign unrestricted free agent Brad Richards as the organization’s ‘finest hour.’

Wait, what? Does the expression now have a new meaning? He clearly wasn’t being sarcastic.

Here’s what he said, in full, when asked what he would change about how the Kings approached the Richards pursuit – “We’re getting there. As much as we’re respected now, until it gets done here, we’re not going to create that destination site, like the Lakers are. It’s really hard – for the American kid, the baseball player or the basketball kid, the whole LA thing, it’s very much a part of our culture. For so much of the hockey on the east coast and up north though, (LA) still seems like it’s out in nowhere land. But, it’s been proven that once you get it going here, you will be attractive. When Gretzky was here, every player wanted to play here. So, we’re close. We’re respected, where people will seriously consider us. But, to beat out those guys in the east, who have the tradition and everything else, we’re going to have to get it done and then we’re going to go to the top.

So, all of that said, were the Kings ever really close to landing Richards?  “After talking to his agent, given where we were proximity wise (to New York), we weren’t a favorite,” said Lombardi.   “We turned it into a real close call. But, in the end, what would we have done different? I’m not so sure. As an organization, I thought it was our finest hour. You had the business department, ownership, the hockey people put a tremendous amount of work into planning that. The presentation, everything was covered. I wouldn’t have changed a lot there.  It just proves to me that we still have to get it done – where now LA is winning and it’s now at the forefront like it was back then, to where every player is like ‘whoa’ and every kid says ‘I want to be there.'”

How close are the Kings to being able to land a top-flight, big-name free agent?  “Now, most people know us and when Richards looked at us he said ‘these guys are going to be good.’ So, we’re now in a position where we can get there (in people’s minds). This was the first guy we really went after hard, the right way. I thought this was the right time to add a top guy,: said Lombardi.  “When all those other guys were up before, you know I feel about free agency, it’s a dangerous thing. I liked using it for the right pieces, like (Rob) Scuderi and (Willie Mitchell). But, you have to have it in place before you go get that top guy. You have to have your nucleus, like (the Yankees) getting (Alex) Rodriguez to add to (Derek) Jeter. So, I thought this was the time.”

As for the now-infamous video they showed Richards and his team of representatives – “It was off the charts. They’re still talking about it back in the agent’s office. It was a great community effort, with Jerry Bruckheimer, Wayne Gretzky – it was great to see him on there representing the Kings – and Kobe Bryant. So, it was a great effort all around. It almost had a community feel to it because you had some of our biggest show pieces (in there).”

Hence, the comment about it being the organization’s finest hour makes sense. They put their best foot forward – a collective effort – and it came across so well that they were able to get Richards to sleep on it and heavily consider the LA Kings.

Which is something Luc Robitaille says has helped the Kings organization take a huge step up forward – “The biggest thing about (the pursuit of Richards) is we made a statement that we’re going for guys. Our team got a lot better and what I love about it is we’re a contender. Right now, every team is taking us seriously. Brad Richards listened to us and took us seriously. I think everybody around the NHL is suddenly paying attention to us. To me, that was the biggest positive. Nobody thought we’d go for Brad Richards once we got Mike Richards. And we went all out for him. We kind of had an idea he might be set on going to New York. But, we came really close and that’s a really good statement for us for the future.”

Regardless of how much money Drew Doughty ultimately signs for, there should be plenty of money for Lombardi to use next summer towards the pursuit of other free agents. He (potentially) has Dustin Penner, Willie Mitchell, Jarret Stoll and several others coming off the books.

Now, now, don’t get ahead of yourself.

Lombardi on Holloway and Moller signing to play in Europe

Robitaille talks how and why the Kings changed their jerseys

Robitaille on why the Kings are opening next season in Europe

Lombardi on the performance of coach Terry Murray

Willie Mitchell not sure what went wrong for LA Kings