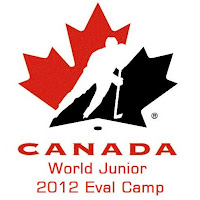 This year, Tyler Toffoli was the lone representative at their week-long camp that ended Sunday night.

MayorsManor spoke with Toffoli yesterday about the overall experience and here are his thoughts on ten items related to what went down:

On the overall experience – “It was good seeing everybody there again, like last year. I felt like camp went well though. It was tough and it was a lot of fun at the same time. We were working hard and getting back into it. It felt good.”

On Ryan Smyth being an assistant coach for one of the scrimmages – “I didn’t really get a chance to speak with him. He came and spoke with us before the game and was telling us about his previous experiences with Team Canada. After that, we had to get to the rink. So, unfortunately, I couldn’t spend any more time with him.”

On the t-shirts given to the players in camp that read ‘Earned, Not Given’ – “I think it’s kind of self explanatory. You have to work for what you want. And that’s definitely what Team Canada is going for next season and moving forward. Hopefully I can be part of it.”

On spending one of the off-ice sessions at a military base – “Yeah, we went to an Army base. We did a little bit of rappelling and we did an obstacle course too. We didn’t have to do it with the 40 extra pounds that they have to do it with. But, it was still tough for what we had to do. I can only imagine how tough it is for them when they go through it with all that extra gear that they run around with all the time. The whole experience was amazing. It was good to get out there and work hard.”

On the most improved player since the last time he was with this group – “I think a guy like Jaden Schwartz. I was with him the whole time. He’s just a great guy and he works so hard. He’s definitely a guy you want to be around all the time because his worth ethic is amazing and it really shows. He’s in great shape and I thought he had a good camp.”

On any differences to last year, especially being the only Kings prospect this time –  “It was definitely different, for sure, I knew that going in. Overall, it was still a good experience. I knew a lot of the other people there. So, that wasn’t a huge deal. It was still good, already knowing a lot of the staff and the players as well. Yet, it was still a different experience than last summer.”

On any funny moments with his roommate Christian Thomas – “I think probably the funniest was this – every single morning we had our wake up call at 7:45 am and the phone would be on his side. He would never wake up. So, we’d just let it ring. I wasn’t about to get up and get the phone. It was right beside him. That’s probably the only funny thing that really stood out between us two.”

On the key highlights from scrimmages he participated in – “Overall, I think it was just going out there and working hard on every shift. Game two was tough. We had a few chances to score and we just couldn’t capitalize. After the game though, I got to shoot in the shootout and I scored. That was fun. They did the same thing after the first game, but I wasn’t one of the five guys selected that time.”

On the skill he showed off the most and/or one thing he would do differently in camp if he could go back and change something – “Capitalizing on more of my scoring chances. I had a few chances where I should have scored (in the red/white scrimmages). But, I just couldn’t put it in. It’s something that I worked on. I thought I did well though. I thought I worked hard and I really showed there was a big step (forward) and a big improvement from last summer.”

On any plans for the rest of the summer, before coming back to LA for Rookie Camp in September – “I’m in LA now to work out with Tim Adams for two weeks. Then, it’s back to Ottawa for camp with the 67’s. Right now I’m just going to train and work hard to be in the best shape possible before the season starts.”

When Team USA’s summer evaluation camp ends later this week we should have interviews up with a few of the Kings four prospects invited to participate.  For the latest news on what happened up in Lake Placid earlier today, click here…or for some other interviews, see the links down below.

Warming up for the 2011 World Juniors with Kyle Clifford – interview, summer 2010