You are here: Home / AHL / Another former Kings, Monarchs player signs in Europe 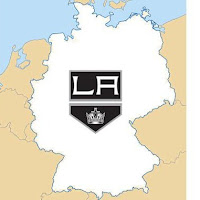 Several weeks back, Los Angeles Kings GM Dean Lombardi was visibly irritated when talking about a few of the team’s prospects signing in Europe this summer.

Today brings news that John Zeiler has joined the ‘other side of the Atlantic’ crew, having signed with the Augsburger Panther in Germany.

While each situation is somewhat unique, it was eating at Lombardi that young players were willing to leave the development process and chase the money being offered in Europe.

An exception he seemed to sympathize with though was when older players, whom he described as “26-27 (years old) and they’ve kind of already been labeled as ‘minor league players’ and maybe a ‘call-up’ player” chose that route.

Zeiler, originally selected by the Phoenix Coyotes in the fifth round of the 2002 NHL Draft, would seem to fit that mold. He’s 28 and has only played 90 games in the NHL – picking up one goal and adding four assists.

He was called up for four games last season and then actually was recalled again during the playoffs (because of Jarret Stoll’s suspension). However, due to the timing of paperwork, flights, etc., he never actually saw any game action the second time around.

Zeiler was not offered a contract by the Kings this summer.

He’ll be joining Gabe Gauthier, another one-time Kings prospect and member of the Monarchs (2006-10), who signed with Augsburger last month.

Rich Clune, another Monarch last season, weighed in with his thoughts on the overseas defections here.

Clarke, the first California-born player to score a goal for the Kings, stopped by MayorsManor last summer to give a detailed account of his time in Manchester, Los Angeles and now over in Europe.  If nothing else, check it out for the prank he says George Parros played on him when they were teammates with the Monarchs. (link here)