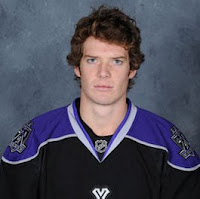 Over the past 18 months GM Dean Lombardi and the Kings have been stuffing their pipeline with left wings, American born guys and/or college hockey players.

His name isn’t mentioned much when talking about the Kings prospects though, except to maybe only the most die-hard fans. He’s largely gone under the radar, having not been drafted and then signed as a free agent in March of last year.

Still, he says he doesn’t feel forgotten about – knowing every team needs (what he calls) a ‘certain type’ of roll player.

Without knowing it, his ties to the Kings began years before he signed with the team.

Prior to college he played with former Kings prospect Teddy Purcell in the USHL.

He also grew up in Sault Ste Marie, Michigan and would cross the river to attend games of the legendary Soo Greyhounds. In fact, during his college days, when he would sneak in a game or two on visits home, the ‘Hounds team he was watching featured Jordan Nolan and Jake Muzzin, two of his current teammates in Manchester.

In the conversation below the self-confessed twitter addict talks about being recruited by Los Angeles, players he draws motivation from, the toughest player in Manchester, his thoughts on the most underrated prospect and shares a prank once pulled on him…

MM: You signed with the Kings after playing college hockey at Northern Michigan. How did you end up there?

RK: I was never drafted in the OHL. I was more like a late developer. I signed in college pretty early. I was 16 or 17 years old. My parents really wanted me to get a college degree instead of going the major junior route. And my Uncle Joe, who was my coach earlier, is good friends with Walt Kyle, the head coach at Northern. It was also a close commute, so my parents could come watch me, and eventually my brother signed there too. I got to hunt and fish all the time there. So, it was pretty much like being at home, up in the UP (upper peninsula). There were a couple of other schools interested in me. But, they wanted me for another year out. So, I would have been playing junior for another year, until I was 20 years old. I kinda wanted to get things rolling instead.

MM: You more than doubled your output during your senior season there (2009-10). What do you attribute the jump in your numbers to?

RK: I gained a little confidence and got some more opportunity from the coaching staff. I went in with the mindset of ‘If I don’t get this thing going right now, this is my senior season, I’m going to be working on a farm or doing construction the rest of my life.’ So, I wanted to pursue hockey. I got some confidence and I think I stepped up into a leadership role that year, put up some points and it worked out.

MM: Then you were singed by the Kings after not being drafted. Talk about what that process was like for you.

RK: It was actually pretty hectic. There were a few weeks where I was on the phone four to six hours a day, everyday of the week, talking with a bunch of different teams, going out for dinners and stuff. Right from the start, LA was the first team to talk to me and it was really appealing. I liked everything they had to say and everybody that came to see me. I talked mostly with Mike Donnelly (scout) and Ron Hextall (Assistant GM). I liked what they had to say about development and they were really up front with where I’d be. They said it may take a year or two in the minors, down in Manchester, which looked like a great place to play. I have no regrets. I love everything about it and they’ve been honest with me the whole way.

MM: You’re a 6-foot-3 left wing, a position where the Kings don’t have a lot of depth right now. What do you think you need to do to have a shot at the NHL next season?

RK: I need to play with an edge. I need to come into camp strong and in the best shape I’ve ever been in. I need to play with a bit more of an attitude. I was really nervous last year at camp. My first year of pro was a huge learning curve for me. Hopefully I’ll go into camp with a little more confidence this year because I know the guys better. I’ll need to go in and be that role player – hit and grind, hopefully chip a couple of goals in. We’ll see what happens from there.

MM: Were those some of the thing they told you to work on when you left camp last year?

RK: Yes – get stronger, hold on to the puck more, kill some time down in the corners and make some plays, get it out of the zone.

MM: There are several other guys in Manchester with an edge. Justin Johnson, Jordan Nolan, Richard Clune – who’s the toughest of those three?

RK: I’d go with JJ, but I bet Nolan can give him a run for his money if they went head to head. And Clune, you have to give him all the credit in the world. He’s a smaller guy, he’ll scrap with anybody, and he’s a feisty little guy. He’s awesome, I love him.

MM: What player in Manch brings out the best in you and how or why?

RK: I would say John Zeiler, Rich Clune and Brandon Kozun. Kozy’s always there on the bench and if I’m on his line, he’s chirping me ‘Catch that pass!’ He’s an amazing player. It’s great when I actually get to play on his line. He’ll make unbelievable plays to me, back door and stuff. Sometimes you don’t expect it. So, maybe you miss the net wide or hit the post or the goalie saves it. He’ll say ‘Come on man, you gotta bury that!’ He’s real intense. He gets you going and keeps you on your toes.

Cluney, he’s a motivator. He’ll say things like ‘Come on, you know you’re good – just play the way you play.’

Then, Z (Zeiler), he’s a leader in the locker room and he’s also like your brother. You want to play for him because he’s such a good guy.

MM: Perhaps the answer to this next question will be similar – but, in your opinion, who was the most underrated player in Manchester last year and why?

RK: Maybe Kozun. He was leading our team in points there for a while, as a rookie. He wasn’t playing as much as I thought maybe he should have. That’s always up to the coaches and their gut feelings though. I think he’s a great player and I think he’ll have a lot of opportunities with the Kings in the future.

RK: I first got into it a couple years ago and it was kinda like a mass text to all my buddies because it was only us following each other. Every time my buddies or my brother would tweet we’d all chirp each other back and forth. Now, I have some more followers and it’s more fun. I like to tweet pics and update what I’m doing. I like to follow celebrities and other hockey players to see what’s going on. It’s just fun to connect with people.

(He also told me he was hoping to get a pic with Bailey while he was here too. Keep an eye out on his twitter page for that one.)

MM: There are usually some good pranks going on in Manchester. Did anybody pull one over on you last season?

RK: Well, the best prank I can think of wasn’t actually in Manchester. One year in Cedar Rapids (USHL), Teddy Purcell got a hold of some girls phone and he was texting me from it. He had me going for a while. He was saying some pretty weird things from this girls phone and I kept thinking ‘What is going on here?’ Then he printed out the whole conversation and brought it the locker room and I was fined.

Fortunately for him, Purcell is now in Tampa Bay.

So, hopefully he can avoid the fines while he’s here at Development Camp.

More camp notes will go up later today and tomorrow – including an interview with the ‘underrated’ Kozun.

In the meantime, check out the interviews below for more information on some of the other campers.