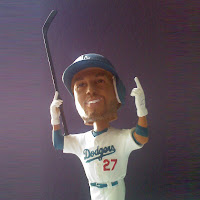 Over the past several seasons the Kings and Dodgers have maintained a friendly marketing relationship.

Players from both sides have visited the home turf of the other sport and helped promote their team and a greater sense of community between their fans.

Prior to last night’s Kings-themed evening at Dodger Stadium, I spoke to first baseman James Loney – who was eager to come down to Staples Center and not just watch a game, but take part in warm-ups on the ice.

After the Dodgers downed the Diamondbacks 9-5, Matt Kemp didn’t exactly share his teammate’s enthusiasm for participation – “Nah, them boys are pretty rough, man. I don’t think I’m too good on ice either. I’m a little clumsy. So, they got me on that. I’ll definitely come watch a game. But, I don’t think I’m going to get on that ice.”

Like Loney, he hasn’t formally been introduced to the NHL yet. “I’ve never been to a pro hockey game,” said Kemp. “The first game I went to was a CHL game, the Oklahoma City Blazers. That was a long time ago.”

Most likely, that was about a decade ago when Kemp was attending high school in Midwest City, OK. While there, he was a two-sport star, playing baseball and basketball.   Since then, the Blazers have ceased operation and been replaced locally with an AHL team.

“The NHL is probably pretty different than the CHL,” Kemp conceded.

He also surmised it’s something better to be seen live, rather than view from the couch. “I don’t really watch hockey on TV. But, I’ve heard it’s great to watch in person. Just like some people think baseball is (better) to watch in person. But, I definitely need to catch a Kings game when the season starts.”

Having already admitted he didn’t want to suit up for action, I asked if he would at least drop the puck before a game. A few assurances needed to be put in place beforehand – “I don’t want to fall,” said Kemp. “Do we get to wear shoes on the ice?” Once I told him about the carpet they’d lay down for him, he agreed, “Alright, I’m good. I’ll do it then,” he chuckled.

He might even be able to bring an MVP trophy with him.

Kemp, who blasted a three-run home run in the third inning to put the Dodgers up 3-1, finds himself among a handful of strong candidates for the post-season award.

Last night’s deposit into the outfield seats was his 25th home run of the season. Coupled with 27 stolen bases, he became the fifth-fastest National League player to ever reach the 25/25 club. Only Eric Davis, Bobby Bonds, Alfonso Soriano and Howard Johnson did it in fewer games.

Before things were over though, he collected two more RBI after singling to centerfield with the bases loaded in the fourth inning. “In past years, I haven’t been real successful batting with the bases loaded,” Kemp reflected. So, what’s changed? “I’m just concentrating (more) and trying to get a good pitch to hit,” he said.

Despite a stellar season, Kemp isn’t ready to talk about his possible MVP selection though. “The best players in baseball get to the World Series, and that’s what I’m trying to do.”

Most believe it likely won’t be happening this year, given how far back the team is in the standings.

However, if the Dodgers can keep playing the way they have been the last few weeks, Kemp thinks there’s still a chance. “We can get back in this race,” he confidently proclaimed.

If so, I’m sure the Kings wouldn’t mind if he brought a second trophy along with him to drop the puck downtown.