You are here: Home / hockey / Los Angeles Kings – the ‘All American’ team 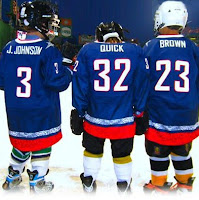 Final results from yesterday’s poll are now in and things basically came down to three players capturing 75% of the voting totals – Dustin Brown, Tony Granato and Jonathan Quick.

While it’s not totally surprising to see two current players do so well in the rankings, it’s a least a little interesting that a few of the other players didn’t get more recognition – especially considering their solid resumes.

In the end though, Brown and Quick tied for the top spot as the ‘Best U.S. born player to play for the LA Kings.’ Each captured 25%, Granato was a close third with 23%.

So, keeping with the theme, here’s a look at the Kings’ first team all-star group, comprised of purely American born players.

Fortunately, on these type of lists you don’t need a back-up goaltender – because the Kings, a franchise not exactly known for being rich in goaltenders, are even more thin when you start to mine the lists for American born netminders.

You’d probably have to hand the back-up role to Jeff Zatkoff, who has yet to even play in a single NHL game. The highly regarded prospect spent last season in Manchester, where he posted 20 wins with a 2.68 goals-against-average and .911 save percentage.

Once you get past the current Kings defensive core there aren’t many blueliners with American roots either.  However, that could be changing in the years to come also, as GM Dean Lombardi and crew have added a number of talented U.S. defensemen to the organization recently – including Derek Forbort (first round 2010), Kevin Gravel (fifth round 2010), David Kolomatis (fifth round 2009) and Alec Martinez (fourth round 2007) and Patrick Mullen (free agent signing, 2009).

Forbort and Gravel are both scheduled for next week’s Development Camp in El Segundo, CA.  They’ll be two of the 11 defensemen in camp, a group that also includes six free agents.

Tomorrow I’ll post an interview with one of those invitees, defenseman Pierre Durepos of the Memorial Cup champion Saint John Sea Dogs.