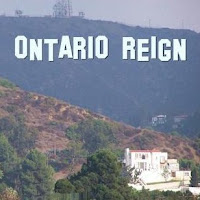 Since being drafted by the Los Angeles Kings in the fourth round of the 2009 NHL Draft, goaltender JF Berube has seen his stock quietly rise.

This past season he posted some of the best numbers in the entire Quebec junior league – including 32 wins, a 2.60 goals-against average and a .902 save percentage. His team then swept their first round opponent in the playoffs, only to lose a tough second round series in six games.

The highs and lows continued over the next few months for the 20-year-old netminder when soon thereafter he had minor surgery on his hip and later signed his first pro contract.

Now, it appears a change in nickname may be in order for the man known as ‘Hollywood’ – a handle Kings goaltending coach Bill Ranford spoke about during Development Camp.

“I saw that. But, I didn’t even know that was his nickname,” explained Ranford. “It’s not really his demeanor. I’m guessing it was more the tie-in that he was drafted by LA because he doesn’t come across as a Hollywood guy, by any means.”

With Jeff Zatkoff recently signing a one-year deal, he and Martin Jones will most likely be the goaltenders in Manchester again.  Leaving all signs pointing to Berube staring the year with the Ontario Reign, the Kings’ ECHL affiliate. However, Ranford wasn’t ready just yet to commit to such a plan.

“We’re not going to put a stamp on that. But, if you look at the history of our goalies, that’s kind of the way they’ve gone. A year or two in the ECHL, then move up to the American Hockey League,” said Ranford – referring to the path of Jonathan Quick (who played 38 games in the ECHL in 2007-08 before moving on to Manchester and eventually LA) and Zatkoff (who played in Ontario during the 2008-09 season and spent the last two seasons in the AHL). “The tough part is we have two pretty good candidates up with the big club right now. So, it may slow down the procession of moving up.”

He went on to say, “We’re excited to see (Berube) get healthy and see him in training camp. It’ll be a big year, learning to be a pro. And if it happens in Ontario, that’s just a huge bonus.”

So, maybe ‘Hollywood’ will be changing things up, perhaps going with something like ‘909.’

It just doesn’t have the same ring though, does it?

For now, Berube is just happy people can’t call him ‘crutch’ anymore. He was able to put those away just prior to coming to Los Angeles for camp.

More importantly, the injury wasn’t anything serious, explained Berube – “It’s kind of an old injury that I had and the Kings wanted to make sure we fixed it up for my future, so that it doesn’t get worse. It’s just minor stuff that was bothering me a little bit. It was a good thing to fix it up now.”

And even though he wasn’t able to participate in the on-ice drills, Ranford saw value in having Berube attend the camp. “You can learn a lot by watching other guys,” explained Ranford. “He was in all our video sessions (and) you want him to be around the guys. He’s going to be part of our organization for a while, so you want him to get to know the guys and feel comfortable. There’s no use leaving him at home. This is his peer group that he’s going to be carrying on with for the next four or five years, so you might as well get him used to it.”

Berube pretty much agreed, saying “Just watching the guys, especially the goalies, I was able to learn some technical stuff. I think it’s always good to watch and learn.”

Yet, he would have preferred to be on the ice showing the coaches how he’s grown over the last year. “It’s too bad that I can’t go out on the ice right now, as they haven’t seen me a lot this year,” he shared.

“I learned a lot from playing more (compared to the 2009-10 season),” added Berube. “I’m a lot more mature and I gained a lot of confidence…I’m more patient on the puck. I read and release better. My game has really come a long way since my first Development Camp. I’m improving and heading in the right direction.”

Which is something that could be said about his game and his injury. The hip situation is expected to be fully healed next month. So, he should be good-to-go come Rookie Camp.

He’s also not too worried about the team’s depth chart. As noted by Ranford above, they’re already stacked ahead of him and they just drafted Chris Gibson last month. Neither situation bothers Berube though – “I’m just trying to focus on my play and doing my own thing. They’re all good goalies. Of course, you want to beat them. You want to be the best. (But), having good goalies in the system helps everyone. You see the younger guys pushing, and it pushes everyone.”

What’s next then? “I feel like I’m ready to move up to the pro level,” stated Berube.

Which brings us back to Ontario.

Finally, I asked Berube about his mask for next season – as he’s been known to have some rather elaborate paint jobs the last few years. “I don’t know exactly what I’m going to do yet,” said Berube. “But, I’ll guess it’s going to be pretty sweet again.”

No, some football guy already used that one.

Back to the drawing board for Hollywood.

Like his mask design, maybe he’ll have a new nickname picked out come camp in September.

Kings coaches have plenty of praise for Martin Jones